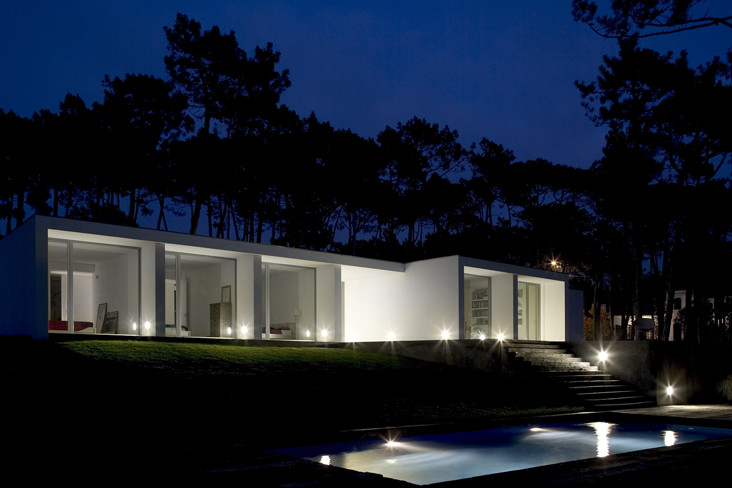 Text description provided by the architects. It’s all about a project for a summer home, as a result of an order that from the beginning had precise conditions in terms of program: a big living room, connected to an office area; a service area with space for light meals attached to the kitchen; a private area with two small bedrooms and a suite with an incorporated sauna; a garage with an incorporated workshop space; a swimming pool with a big solarium; well illuminated interior spaces opened over the landscape; Formal soberness and a contained budget were also demanded.

The result is a singular house: a volume of regular appearance and of compact reading, marked by big openings towards south and west e by small openings facing north and east, as a clash between the glass box and the white painted concrete box logic. Taking profit of a slight slope on the west side of the lot, the living room opens over a terrace unlevelled over the swimming pool and the solarium. The split between the living room and the bedrooms is made by a covered exterior space, which could be considered as a patio, near the terrace and in directly linked with the hall.

This house, being clearly contemporaneous in its formal approach, is also an attentive and sensible look over the housing phenomena and over the act of conceiving the domestic space. The final proposal, a permanent mark of a personal territory, appears from the logic refinement of this project. By conjugating program, place and time.

The program, by the clear sense of will, of tastes, of habits and of living experiences revealed by the client. The resulting space adapted to its users and not the other way around.

The place, by understanding the landscape where it is inserted: a few kilometres from the sea, in a dense pine area, spotted by summer houses, (un)lined following twisting paths, where vulgarity prevails alongside a neo-vernacular adherence. In this “locus”, full of tall and slim pine trees, the presence of that house, which shapes, textures and extravagant transparencies are in permanent conflict with the nearby buildings, is a differenced sign, that invents a new place.

The time, by reducing to the minimum the formal e composition elements and used materials. The adoption of a project basis assumedly compromised with the contemporaneous rules. The recurring theme of projection plans and faces is the square, which is shown by the openings’ drawing. The duplication or subdivision of this base module, with no risk of becoming an obsession, is subtly contradicted by a series of project decisions, defining the domestic uses and living experiences. It’s the proper fluidness of space organization that differences the functional sectors and defines the boundaries between private and public “territory” within the house. Doors and corridors, frequently used on domestic architecture to circumscribe movements and conditioning looks, are here replaced by an inverted T-shaped space that is extended over the exterior forming a patio.

The double axial and convex condition of this space limits circulation between the living rooms and the bedrooms, at the same time, enlarges the visual camps without promoting indiscretions or forcing intimacy. The relations between the physical and visual continuity established between interior and exterior, achieved by the use of big glass windows on the living room and bedrooms’ level, contrast with the intimacy and opacity given to the service area and contribute to the comprehension and clarity of the space logic of this house and of its functionalities. 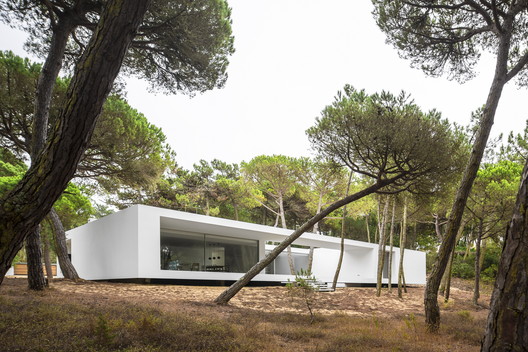