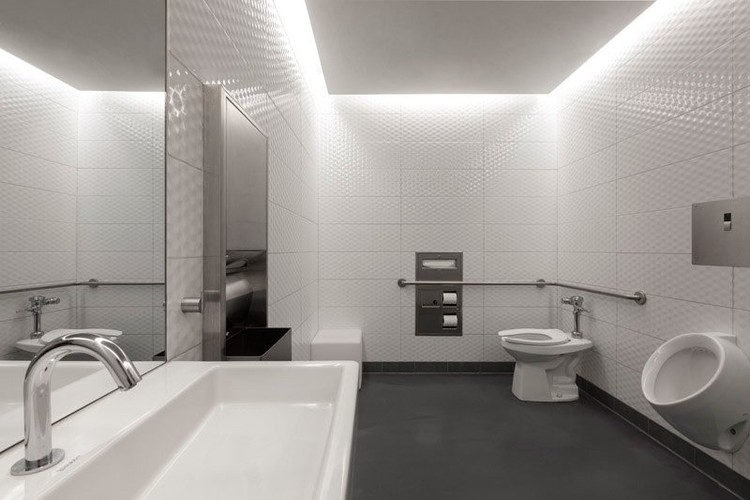 The newly design restaurant, Yojisan, by architect Dan Brunn in Beverly Hills, California adds a modern touch to the neighborhood with a sensibility to Japanese materials, culture and lifestyle.  The restaurant is designed with a monolithic, but materially subdued exterior while being charged with a visually graphic interior.

The exterior is sleek and simple with the use of cedar planks as a header over the glass storefront that exposes the interior of the restaurant to the street.  The inviting facade also features a canopy of leafy plants that greets visitors upon entering the restaurant.  In contrast to the light airy qualities of the interior walls, the host stand evokes permanence in a heavy board formed concrete piece that also serves as a transition point between parts of the restaurant.

Overhead, the ceiling drops over the two main dining areas, isolating diners in a warm glow produced by the reflective red finish of the inverted bento box shaped volumes.  The walls of the dining room feature an existing sand blasted brick wall covered with a sheer curtain to soften the space and attenuate noise.  The opposite walls feature angled light coves that rise to the ceiling – an effort to evoke bamboo shoots.  This wall provides the main circulation artery for Yojisan and evokes the sensation of traversing through a field of illuminated stalks by playing with negative space.

Essentially, the restaurant is minimal, using light and color s to accentuate material qualities.  The architect using strong moves to isolate different spaces within the already limited space, while speaking to the tradition of Japanese cuisine.