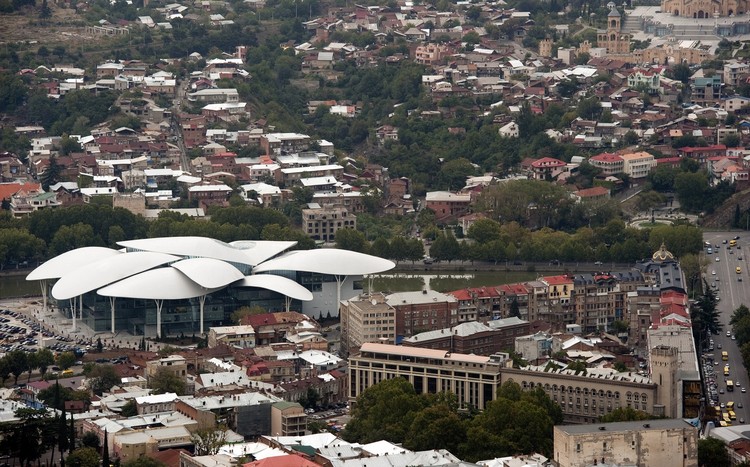 The new Tbilisi Public Service Hall, designed by Massimiliano and Doriana Fuksas in Tbilisi, Georgia, was inaugurated on Friday, September 21st. The new building houses the National Bank of Georgia, the Minister of Energy, and the Civil and National Registry in a 28,000 square meter building composed of seven volumes.

The public service building is situated in a central area of the ceiling where it overlooks the Kura River.  The seven volumes that make up the building contain offices for the different public agencies housed inside.  The volumes, which are embraced by seemingly billowing tops, are placed around a central atrium that is considered the central public space and core of the project.  The offices are connected via footbridges that stretch on different levels.

The penetrating rooftops of the volumes create a unique set of exterior-interior conditions.  These eleven rooftops, described as “petals”, are independent – formally and structurally – from the building.  The petals vary in geometry and dimension and are supported by steel pillars.  The structure gives the impression of being in a overgrown mushroom forest or in the midst of ancient towering trees.  These isolated forms are perceived from both the exterior and interior of the building.