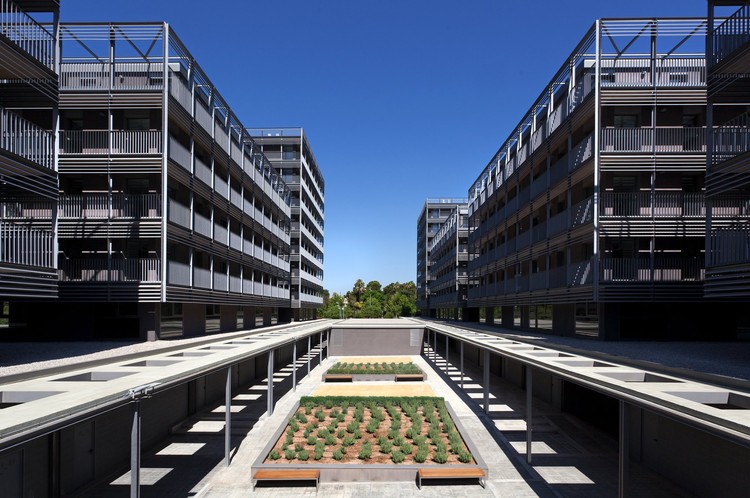 The Project focuses on questions like density, porosity, intimacy and adaptation to the city, through the alternancy between void and mass. In the framework of a master plan developed together with OAB and Edifica for the area occupied by the former Villa Dolores at the west side of the city of Castellón, the proposal for those social houses is placed in the most geometrically complex site, with a triangular perimeter with a curved hypotenuse.

A grid of buildings sews voids and masses showing themselves at the hypotenuse through three triangular squares over which the higher four volumes show as urban references. Every piece stays floating over a light and continuous loggia that unifies the whole and filters the access to the ground floor commercial premises and to the three interstitial spaces where we can find large and dense gardens that share the treatment of the three outside squares.

House typologies are developed in two kind of pieces, the high ones that look on to the squares, have a square plan of 20×20 and the rectangular ones of 25×20 that configure the two short sides of the triangular and the intermediate pieces, all of them separated by 6 meters gaps.

All of them have a continuous outdoor space at least 1.20m wide that acts as a filter to the outside. Its materialization through folded and lacquered steel in prefabricated modules, and its structure with vertical and alternative vertical railings and horizontal louvers, build a urban filter that in its own, through mechanisms like repetition and diversity, set a certain architectonic iconography, based on the containment and rigor of the skills used.

The pulled back position of the attics and its separation from the plinth, qualify it as a light, metalized casing, changing with the light.