Short historic notice On the remains base of a XVI century house and a renaissance palace at the Jewry of Toledo, it was built on the beginning of XX century the edification conjunct that today compounds the El Greco Museum House.

The Marquis de la Vega-Inclán was who recovered  those areas, as well, the gardens during the years 1907 – 1910, the aim was to develop the idea of organize a center dedicated to the art work of El Greco performed at the Jewry of Toledo,  in the real El Greco ´s house environment , nearby of Villena’s Palace.

When the works were finished the Spanish State donation was formalized, and on April, 27th, 1910, the Patronage was founded, this institution took over of the custody and govern of the Greco´s Museum House. That age significant personages were involved in the Patronage. (Beruete, Sorolla, Mélida, Cossío, etc.). The House was opened and inaugurated on June, 12nd, of 1911. A section was restored as the Marquis Vega-Incan’s house, staying this private situation up to 1942.

The reasons for restore this conjunct were to shelter in it, the El Greco ´s work collection that was spread out all over the city of Toledo (San Jose´s Church, Santiago ´s Hospital, etc…) and was on risk of disappearing and lost. This collection was developed with a further room’s extension at 1921, for the exposure of the painting art work of the XVII century Spanish schools. This should be the starting point of a Spanish Art Center. 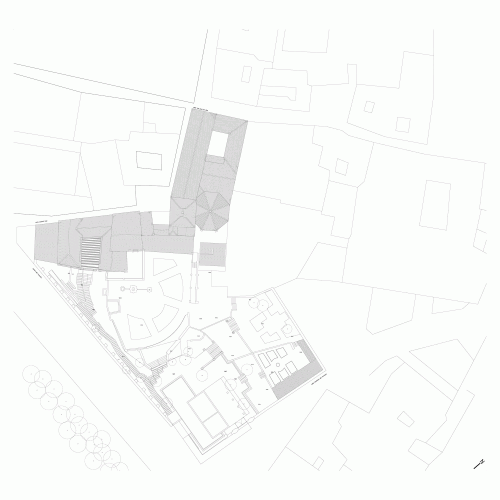 Project The target of the Project has been to take advantage of space and cultural potential that the edifications, gardens and the El Greco personality as well, going through a realignment labor. Meanwhile a pavilion construction gives shelter to the museum funds and a new travel path is restructured across the conjunct of buildings (rehabilitated and adapted to the current normative standards) and also allows the visit to the gardens and caves.

Museography The museography project, although formally distinguished, takes part of the propound common objective, going through the existing building path, showing the recuperation and construction of the El Greco figure by the Marquis de la Vega-Inclán, the work and the different aspects of his life and travels, and his painting later influences, with the aim of explaining and giving value itself trough a reference configuration frame.