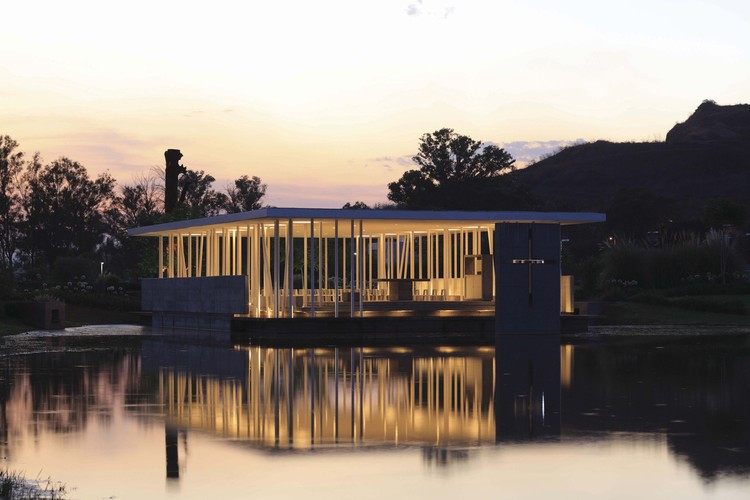 The architectonic concept for this ecumenical chapel  is that  the countless  columns  that  disorderly support  the  rectangular roof  for the chapel, are conceived as an analogy of a group of  filaments that,  when lit with the proper energy,  can illuminate our earthly  lives  with a  glimpse of  heavenly light.

According to Pythagoras “this world is false and illusive, a turbid medium in which the rays of heavenly light are broken and obscured in mist and darkness”.

On the other hand, Mother Teresa tells us that through constant prayer we can become an instrument of the divine light that illuminates the world.

“The filaments of the light bulbs are useless if they are not energized. You, me, are filaments.   The energy is God.  We have the possibility of letting this energy pass through ourselves and let it utilize us in order to produce light for the world”.

This ecumenical chapel takes advantage of its central position within the residential development to remind its users that spiritual life has become a forgotten priority in our everyday activities; the chapel takes the central stage of the development  in order to emphasize the possibility of making the act of praying a useful habit that cannot only help each one of its inhabitants find their  own path in life, but also to help everyone of them become an energized filament which produces light for the world.

This chapel is configured as a lightweight structure, almost ephemeral, that makes itself accessible for everyone at anytime; the chapel dissolves its boundaries in order to impregnate itself of its immediate surroundings and becomes a semi transparent object difficult to idealize. This building performs as  a character that acts under the effects of  light, that changes with sunlight, that becomes enhanced by its users and celebrates its mission as a catalyst of the  everyday activities  proper of this residential development.

Furthermore, spirituality is no longer a luxury for a few, that can only be achieved through a scheduled visit to a sacred site, but it could become a usual state of mind that transforms our everyday lives and becomes one positive influence for the world that surrounds its users.