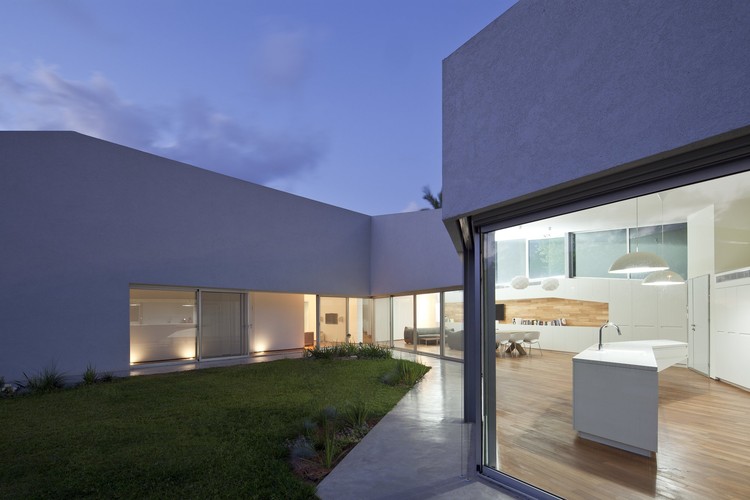 The house is the site itself. The place already has its own geometry created by a gradient rising some three metres. It has an ideal path; it is raised above the ground and visually seems to tower above the sea simply by following the perimeter of the site. This zigzagging forms the grammar of the project.

In order to give the gradients a shape we redesigned the site with oblique planes connected linearly and following the axis of the orientation of the curves of the various levels. Then we inserted the volume of the house as though it were a further new tense line in the fabric of the territory. The roof is the key element for defining the fracture between the planes of the site and those of the house. From ground level these planes range from -0.30, spreading out in various directions, to +3.15 from where the sea can be seen. The roof defines both the space inside the house as well as the various slopes, even in cross-section.

The continuation of the house’s topography can even be appreciated from the inside; this is because the living room has a long window which visually connects the gardens at various levels as well as the two extremities of the lot. The site/block begins as an incision into the ground to carve out the service area and the garage, and then it slowly curves by gradations to arrive at the entrance/living room and then to re-emerge in the zigzagging of the blocks built on two levels overlooking the sea.

The volumetric folds of these diagonal levels also reflect the climatic conditions of the area; the wind blows from the east and can be channelled to flow inside the volumes of the building and regulate its temperature in a natural way.

So the ground floor is free of walls. Its everyday activities are undertaken in a unique space articulated by its topography and the plants. The vertical connecting elements consist of the external roof/ramp and the stairway between the walls of the night time areas. This also links the children’s bedrooms to their parents’ private area.

This second floor consists of the night time zones and service areas. An internal patio acts as their intermediary; this is an open cut to the sky separating the domestic area of the apartment from the client’s clinic/studio which has a separate entrance.