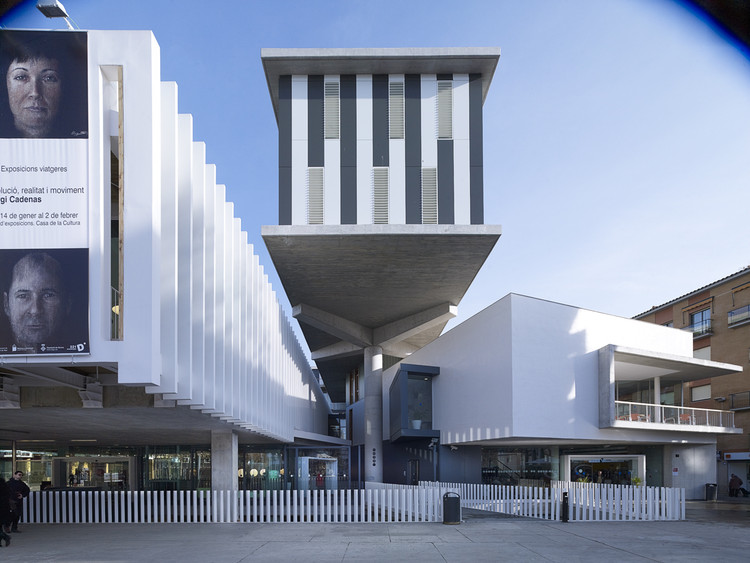 The project consists of the design of the Plaza Pere Torrent, the construction of an 8.000m2 building and its integration with the surrounding Paseo de la Riera and access to Lloret’s old town.

The program was an ambitious one: the building had to accommodate the local municipal library, a multiuse hall, a children’s play centre, a meeting room, an adult learning centre, a day centre for the aged and the offices for social services.

The proposal investigated various options that permitted integration of the exterior with the interior, with the objective of bringing the urban nature of the exterior plaza into the building itself. This composition of levels has attempted to enlarge the existing plaza lengthwise, respecting its height to the multi-use hall in the interior of the building. In order to strengthen the public character of the building, and taking into consideration other buildings that feature a continuous facade facing the plaza, the building has been turned 90 degrees, making its outline higher and so as not to ‘face’ the plaza, but rather a side street.

For Daniel Mòdol, an urban designer accustomed to working with large-scale infrastructures, another way of emphasizing the project’s public character was applying constructive logic to the infrastructures where finishes were not a consideration, due to the fact the element is purely functional. In this spirit, the use of reinforced concrete as prime material transmits this search for functionality.

Another important consideration is the accumulation of the largest volumes in the central area, permitting construction of an ‘interior street’ that crosses the building and demonstrates continuity with the plaza as well as opening up vistas of the layout of the surrounding streets.

The volumetric composition has taken into consideration the frontline of the Plaza Pere Torrent with the aim of that each of the buildings remain apparent and significant from their exterior. The order and position of the buildings rising up in the northwest responds, on one hand, to correct orientation criteria as the main sustainable strategy and on the other to identifying the end of the building from the plaza.

The roof is higher (inside it accommodates the café of the Adult Learning Centre and a viewing point) and covers the exhibition patio, tying together the already-existing elements. The large open space that has been created inside permits the visitor to identify the uses that are configured within the building, without losing references to public space.