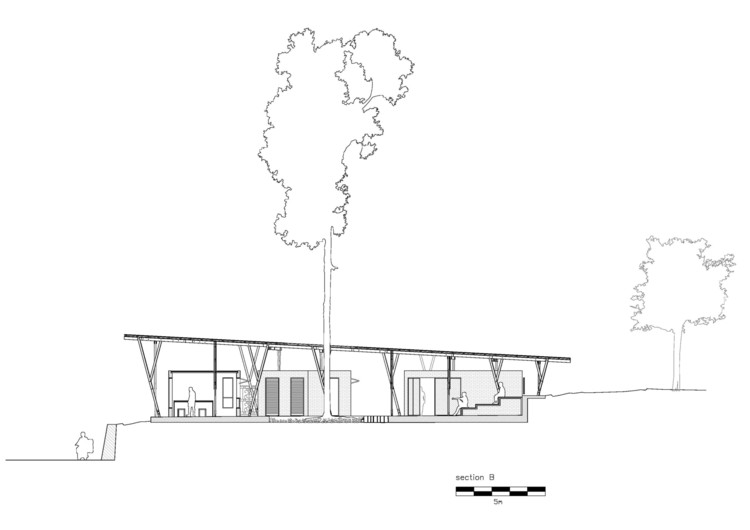 The work on Cassia Coop Training Centre started during the autumn of 2010. It all began with a visit from a French businessman, Patrick Barthelemy. He had come all the way from Sumatra to our office in Trondheim, and sat before us with a fascinating story and a briefcase full of cinnamon. Part of the story told of how an area of Sumatra supplies 85 % of the cinnamon consumed worldwide. Yet another and more sinister part of the story concerned workers without rights, underpaid and working long days in unsafe and unsanitary factories. The story made an impression on us. After a year of planning we found ourselves deep within the cinnamon forests of Sumatra, ready to design and build a sustainable cinnamon school for local farmers and workers.

Cassia Coop Training Centre has become a unique centre with ambitions of being better than its competitors, not only in qualty, but first and foremost in ethics. The centre wishes to set a new standard in how to run a socially well functioning enterprise; local farmers and workers will receive proper payment, a decent healthcare program and have access to schools and education. In addition, the factories of Cassia Coop will be sanitary and safe.

The main idea behind the project is the classic consept of a light wooden construction on a base of heavy brick and concrete. The wooden construction gives a feeling of being within a cinnamon forest. Cassia Coop Training Centre is built around a pair of mighty durian trees, with a scenic view of the beautiful Kerinci-lake in the front and with its back towards lush cinnamon forest. A major challenge has been to create a naturally ventilated climate beneath a roof surface of no less than 600 square meters. Knowledge and experience gained in former projects have greatly aided us in achieving this, through the use of thermal mass, reduction of sunrays and maximized eaves.

The project is mainly constructed from the use of two materials; locally crafted brick and the trunk of the cinnamon tree. The trunks are a by-product from the cinnamon production and it has a low status among the locals. This low status, however, seem quite undeserved, and so we chose to utilize the trunks in everything from the main construction to the interior of the centre. The finesse of craftsmanship found on, amongst other things, the doors and windows of the centre, is some of the most impressive we have witnessed during our projects.

The main construction consists of a mass produced Y-pillar, bolted down into a concrete footing. The placement of the pillars subordinates to the floor-plans, while the system of the construction secures tightness and rigidity. Underneath the massive roof surface we find five brick buildings, amongst them a small laboratory, classrooms, offices and a kitchen.

In a project of this size, with a short timeframe of three months, logistics will present itself as one of the major challenges. With seventy workers taking part, eight water buffaloes hauling trees from the forest and an on-site sawmill, project management becomes essential. The entire project is made up of ten simple details. Basic and pragmatic approach to design made it possible to realize this project with an untrained workforce.

Another major challenge of building in this area is the frequent earthquakes. The construction has already survived several quakes reaching over five on the Richters scale. This proves that the idea of separating different building components with different material frequency works. Cassia Coop Training Centre has passed the test of the forces of nature. We hope and believe it will also fulfil its ambition of giving the local farmers and workers a safe, sanitary and socially sustainable workplace.