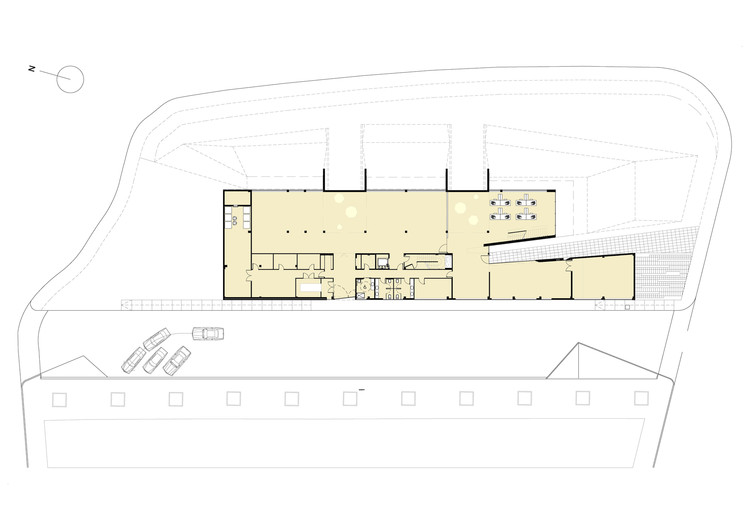 The concept of the Police Station moves towards a building which has taken care to evolve and be conceived as nearer to local concepts and design, thus tacitly nearing itself towards the citizens which it strives to serve.

This building is conceived as containers whose functionality and versatility were sought from the beginning, and were revealed as correct approaches, by the ability to adapt to changes in the program to which it has been subjected.

The geometry of the plot, its uneven topography and geological characteristics of the ground were conditions to conform the volume and singularities of the current building. Two twin longitudinal bodies arranged on three floors respectively hold public and private activities; this access can be restricted, temporarily, and /or permanently.

From the outset, we chose to raise the three-storey building, freeing the perimeter as a link to its environment, facilitating gardens to the Avenue, and private parking at the rear ride. The project is divided into two distinct parts which, in turn, shape the volume of the building: on the one hand, the spaces give access to the public and its use, characterised by free open areas towards the main Avenue, with a zigzag composition to create interior courtyards; on the other hand, spaces for internal use, private and restricted to the public, with narrow longitudinal openings towards the rear pedestrian walk, accentuate its solid and compact appearance. The visual relationship with the outside is subject, therefore, to the use and nature of the interior space.

The major distributor of the building is the central corridor that separates both volumes, highlighted by a skylight that bathes the internal board, accentuating the linearity of the project. This corridor has several holes, which illuminates the lower section in a natural way, communicating visually both floors and highlighting the areas. The tiles of natural stone, also on back walls, serve to cool indoor temperatures in a climate normally very hot.

Double spaces occur in the volume felt as necessary for the human scale to be momentarily lost in favour of the solemnity and institutional respect required by certain areas of the building, as well as, to promote the global and expedited perception of the building; the misplaced volume of the extreme sides leads to necessary primary and secondary inputs.

The inner hall continues to the public space of the mini roundabout, and the large marquee distinguishes and emphasizes its ceremonial character, as the main entrance.  Rear access perceives a more common domestic scale through an overhang in progression that accompanies us by the gap between the two volumes.

The light in the proyect

All areas of the project are bathed by light, each is characterised from its point of origin, be it from facade or skylight; this constant presence of light aids the visual and physical openness of the station.

From here, light is the generating factor of the character of each of the two volumes. On the one hand, the more lightweight, public, expressive area; with a colourful, accessible front where one senses the inner activity and prioritizing natural light and work areas. The front offices receive light and offer views through to the courtyards, where the garden areas are captured, which in turn help to promote an ideal atmosphere for prolonged hours of service. On the other hand other, more private areas, are bathed from light through skylights, and openings by way of continuous strips, to highlight the compact volume towards the outside.

The contrasts between open spaces at the front, long perspective spaces, with others restricted are enhanced deliberately. The administrative offices open out onto courtyards with an open facade, whose cross-cutting views to the outside are protected by horizontal slats of concrete, avoiding the direct view to the street for oblique views, which offer the required degree of privacy . The displacement of volumes per floor, allows the design of terraces which enables the perception of the marked depth of the building from within.

The volumes are opposed both formally, one being raw and open, the other aesthetically solid and compact, which serves as the backdrop of the first.  The façade of the first in smooth limestone in “ocre-terroso” colour and smooth texture, is set to oppose the private area, with its cooler ash colour slate and slightly rough texture finish. In the interior of the building, the slate wall canvas stands out to those used on the light colours of the pavement, ceilings and wood finishes.

The gardens moves the building to the back, leaving a decorative strip that widens the view of the Avenue; this enhances the less urban character and amplifies the feeling of continuous public space. The environment picks up the arid landscapes, with plant life adapted to the desert climate characteristic of the South of Tenerife. This enhances a strip which channels the flow of people from the outside area. Moreover, as you near the Station, it offers the perception of the building from different perspective angles. This finally contrasts the rear area comprised of a more private in nature access strip for police vehicles entering and leaving the building.