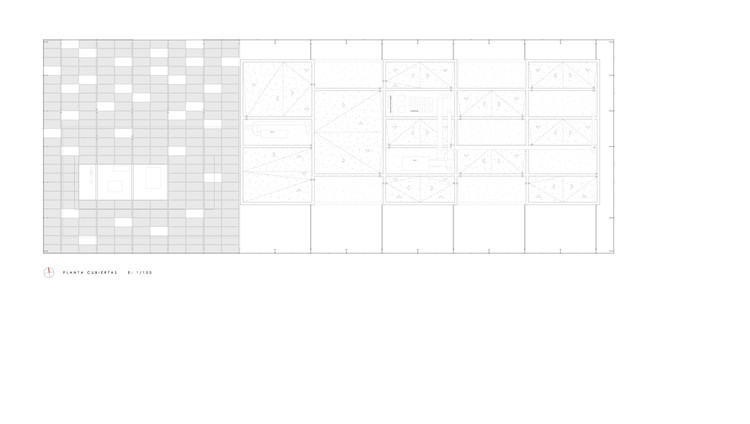 The purpose of the project is the definition of the Visitors Center of Atapuerca paleoanthropological site and the rearrangement of the environment with service and relationship areas with the existing archaeological park.

The proposal starts off from a double reading of the building: from its presence in the landscape and its inner functions. In between proposed a relationship of a certain lack of boundaries in the band between the inner chamber and the outer shell is a space that expands on the main access and allowing expansion of the cafeteria and an extension of the exhibition area.

The image of the building initially refers to the volumes present in the surrounding landscape, with great presence: natural elements ordained by human intervention, such as straw piles, or clumps of trees. Behind this reading of the envelope that filters and qualifies both the perception of the building inside and outside the image from the inside of the rooms, the direct sunlight, wind, appears logical scale and performance of a building exchange visitors and cultural flows. The interior facades are conceived as a volume cut in plan to allow expansion in the interstitial space, and in section to introduce daylight and express to the outside the performance of the parts.

The Center also seeks metaphorical proximity to the site, that effectively contributes to the production of new architectural organism, by recreating a part of the building that belongs to the earth (stereotomic) and one that is detached from it (tectonic), a mask protection as light as possible wrapping the whole. In this sense, the building is designed with a big concrete box -petrous nature- pierced by large skylights, and an outer perforated net that wraps and covers acting as a second skin.

The interstitial space generated between the net and the concrete box recalls the archaeological site workspace. At the building entrance this space is conceived as a rest area, and the one of the opposite corner as a multipurpose outside area. The indoor exhibition space chooses a route between major structural concrete screens in addition to the presence of the lecture halls. At the entrance there is a space for information and sales of publications, a cafeteria and administrative and service areas.

The classrooms are designed as modular elements with multiple possibilities of use and relationship between the polyvalent area and the exhibition area, from a small room for about 25 people to a conference hall for 100 people.

The lightweight exterior enclosure has a discontinuous character, it is punctured or disappears in singular points as the entrance plaza and the gazebo. It generates a variable section in the access area with very strong relationships between the open space of the square and the space of the terrace-gazebo, in contrast to the austerity of the outer box.

To solve the necessarily large car parking area, the idea of nature is recreated again through metal elements, metaphors of trees, on which in the future vines will grow to shape the final camouflage of parked vehicles.

A light canopy and a wooded grid between it and the building will form an exterior square for outdoor activities.

Outside a pond of macrophytes solves the sanitation of both the Visitor Center and the next Archaeological Park. The bed of the pond is a biotechnology system that mimics the process of self-purification that spontaneously occur in natural wetlands, based on the use of plants and other aquatic lower organisms. This system is in perfect harmony with the new policies and sustainable development needs, providing high purifying efficiency with low operating and maintenance costs. The visit to the projected pond finally has become part of the Visitors Center’s educational route.