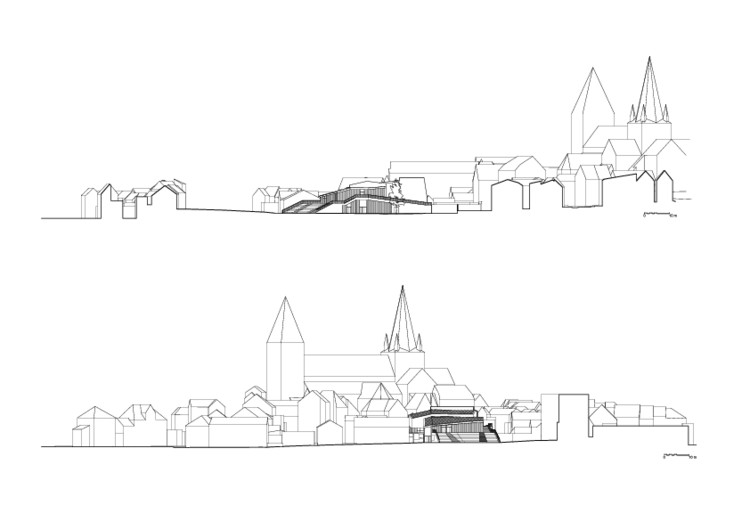 The site is in the middle of the historical center of Soignies, a stone throw away from the imposing XII century collegiate that overshadows the surrounding fields. The Senne, a river that was buried underground in the beginning of the XXth century, draws the outer limit of the site.

Its invisible presence, as well as the massive church above the site, invited a topographical exploration on the project with these two elements as anchors. The building is covered with rough stone crust. Its forms evoke a strange rock emerging from the ground, as evidence of the town’s original bond with its stone.

The proposal goes beyond its initial ambition, which is the construction of a performing arts hall by including in its scope the rich outdoor carnival and local festivals. The project contains, in its morphology, the two sides of the local cultural dynamic: institutional culture inside the building, and popular culture outside and on the building, following the external walks and a stepped slope that doubles up as outdoors seating for street festivals, carnival and other events, or simply welcome occasional pedestrians.

Laid on the Van Zeeland square, the building was designed as an extension of the public space that surrounds it: it penetrates in the interior by numerous entrances around the building. The hall footprint was limited to allow a new public square on the East side. This square appears as an outside foyer. It becomes part of the medieval tissue of streets, lanes and squares. The interior foyers are entirely glazed and cover the entirety of the façades. They transform what could have been a closed box into an open space that lights the city when evening falls.

In this project, l’Escaut capitalizes on programme margins to maximise play and discovery opportunities in the urban space: plays on the outside stairs, during the walk up. The artist Domitienne Cuvelier joins this approach. She places wood benches around stone games on the new square, and surrounds them with trees and plants whose seeds can be used as chips in the games.

In contrast with the airy foyers, the hall is submerged in darkness thanks to its acoustic dyed. The surface of the stage stretches to half of the total surface, which makes possible large-scale dance and theatre shows. The telescopic seating (from 400 to 600) guarantees use flexibility according to the nature of the show. The highest gallery, which has the same visibility curve as the seating, invites you to dive into the stage space.

As a result of a public/private cooperation between the city Soignies, the Belgian French Community and Dexia Bank, the new cultural polyvalent hall has the ambitions of the high and demanding level that the tool provides. This allows the city Soignies to imagine their cultural offer on a regional scale. 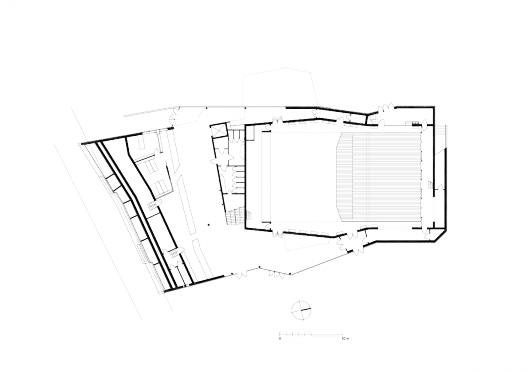