Save
Housing in Canary Islands / Alejandro Beautell
Share
Or
Copy 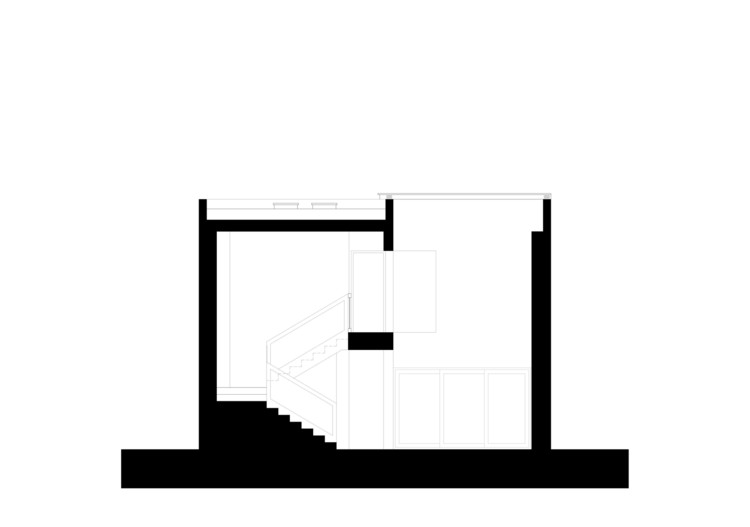 The renovated single family house is situated in the historic city centre of La Laguna, declared by UNESCO in 1999 the cultural heritage of humanity.

The building is situated between party walls and is designed as a single-family house, with two floors above ground level.

Its composition is simple and represents a worthy exponent of traditional domestic urban architecture of the eighteenth century in the Canary Islands. As for its section, the original housing has two floors in its first volume and one floor in the rest of the rooms. The supporting structure consists of load-bearing walls carrying a pitched roof finished in Moorish tiles, in the traditional manner.

The house was found in a dilapidated state due to abandonment it has suffered for decades.

Analyzing the plan, it had shown that the first two volumes were part of the original construction, while the other buildings were added later. It is noteworthy that the second volume has been amended several times so that it carries no architectural value.

The building to be refurbished was destined for residential use in the form of single-family house. All units allowed the realization of the assigned function. Under the program needs requested by the property, on the ground floor the house is made up of an entrance hall, a kitchen, a covered patio, a living-dining room, a double bedroom with wardrobe and bathroom, a storage under stairs, a bathroom and a study.

Top floor provides a living room, a bathroom, a service room and two bedrooms connected with the terrace.

Following the guidelines of the Special Plan for Protection, the first volume of the building is being preserved in the project. It was restored in terms of its architectural values and renovated in order to guarantee the basic requirements that a housing of today demands. The rest of the designed building has a new plan and is articulated with the historical part through a patio.

The access to the house is from the Cabrera Pinto street, through a spacious entry hall, which at the same time gives access to the kitchen, the study and a bathroom. Next, the staircase and the covered patio form a connection space both in the vertical plan, spatially communicating the two floors, and the horizontal plan, as they represent a threshold that serves as a transition to the rooms in the new part of the building. Continuing the route on the ground floor, behind the patio and connected with it by sliding doors, the living-dining room is being placed, visually opening itself to the backyard. Next to the living room and at the property’s request the master bedroom is found, with a dressing room and its own bathroom.

Once the wooden structures of the floor and cover, which were in an advanced state of deterioration, were renovated, upstairs, in what could be the granary of the pre-existing building, the main hall of the house was arranged. It should be mentioned in a reference to the cover, that because of its low construction quality (made from rough wooden sticks, that directly receive an Arabic tiled cover) it was necessary to conduct a complete replacement of the wooden structure, always preserving its type and arrangement presented as sufficient to persecute.

Tiles, that were in a good condition, were arranged as an exterior part of the roof to keep the old look and the chromatic uniformity of the roof. The current hole of an access to this room, was expanded in aim to obtain a window that would allow viewing the interior structure of the cover from the patio. In this sense, the patio becomes the leading element of the building, allowing spatial understanding of itself. The remaining rooms of the higher floor are: two bedrooms with an access to the terrace, a bathroom and a laundry room, both with ventilation and natural lighting through skylights located in the deck.

On the flat, not passable roof of the new part of the building there was arranged a place for technical facilities, which in this way would minimize its visual impact.

Formally, from the lecture of the traditional architecture of La Laguna, there appeared an intention to give a strong character of simplicity to the new built piece. We understand, that the neutrality of the contemporary object enables its coexistence with the historical context.

To favor the natural lighting of the house was another one of initial premises of this project, in order to counteract the shady consequence of its position between buildings of greater height and its development in a depth.

The blind panels of the back facade, in contrast to large glazed openings, define its compositional lines. Finishing materials have the same objective: screens of concrete, white painted plaster and black aluminium matt on the carpentry.

The duality that occurs between the two historical moments of the building is seen as a respectful dialogue between them. The project’s aim was to make this contrast of languages become an added value of a new construction, as described in beautiful words of Octavio Paz (1914-1998):

“The search for modernity led us to discover our antiquity … I am not sure whether this unexpected historical lesson has been learnt by all: between tradition and modernity there is a bridge. When they are mutually isolated, tradition stagnates and modernity vaporizes; when in conjunction, modernity breathes life into tradition, while the latter replies with depth and gravity.”