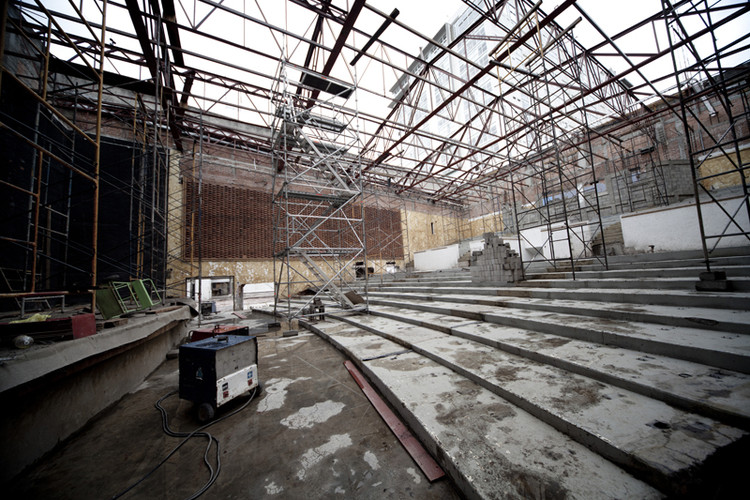 The National Council for Culture and the Arts has announced that the “Cineteca Nacional del Siglo XXI” project has been awarded to Rojkind Arquitectos. This revovation is part of a bigger project that includes the Cinema Museum and a Digital Video Library designed by Mauricio Rocha y Gabriela Carrillo.

“To intervene and expand the National Film Archive involves understanding a substantial change in film, as suggested in the term “moving pictures”.Today, images move not only on a screen, the screens move with us:they go where we go, and the movies, have gone from being a gathering space for the masses, to also reaching us wherever we might be.

The new National Film Archive and Film Institute must understand this condition, both to ensure and protect the wealth of our country’s moving pictures as well as those of the rest of the world and to make them accessible, in all their various forms, to the general public. A place which will have movies, but which will also offer other recreational spaces, taking advantage of the latest technologies. Common spaces and spaces to promote communication. The idea is in part to remove film from its classic exhibition site: movies in the park, in the café, in the square, to transform those spaces to become more than just services related to the experience of the movies, but rather to become part of the experience itself: the park itself as a movie, or the café, or the square.

The project includes the total renovation of the complex, originally built as the “Composer’s Square” in 1984 by Manuel Rocha and transformed on several occasions since becoming the Nation’s Film Archive and Film Institute in 1974.

In addition to the existing screening rooms, the complex currently has five archive vaults, four of them housing a collection of more than 15,000 film classics of world cinema in 35 and 15 mm formats. The fifth vault houses iconographic material, including posters, photographs, slides, negatives and video. The surface of vaults will increase from 1500 to over 2200 square meters, in order to house 50 000 more reels of film. The space for the gallery and the digital restoration lab will have a surface area of 500 square meters and the offices once reorganized, will be reduced from 1900 to 1800 meters.

In total, the National Film Archives will increase its built area from 20,000 to almost 29,000 square meters, of which 7,000 are destined to public spaces. The purpose is to generate a new comprehensive cinematic experience and more options in terms of programming.