Save
Covered in Umbrellas / U. de Talca
Share
Or
Copy

The initial idea was thought provoking: construct a covering using 400 red umbrellas (outside of their intended purpose) suspended over the new pedestrian mall in the city of Talca to create a visual impression of the inhabitants of a city in which it is uncommon to see daring displays in public spaces.

This lack of innovation seems to come in part, from others creating similar urban displays based only on previously proved ideas as well as the minute demand for this type of “product” by the local population. This could explain why businesses are reluctant to fund innovative displays or events. Or perhaps, it’s the stunted competitive environment that hinders creativity. 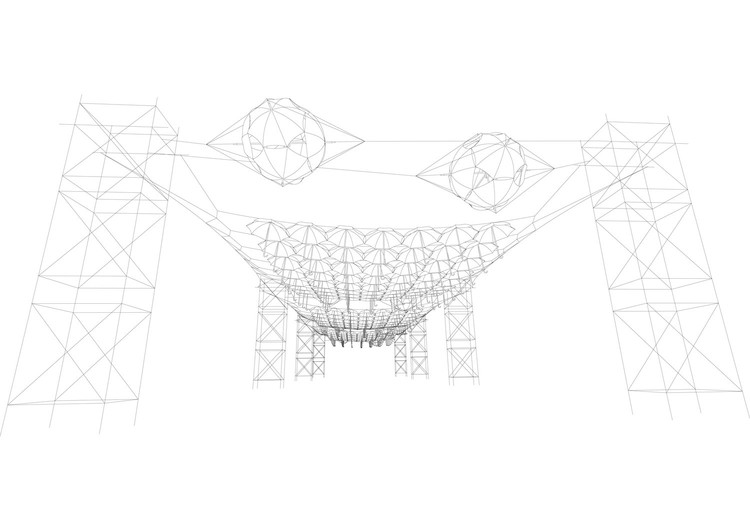 The Workshop Projects were under way and with only 5 weeks until the due date, the 36 student team members carried out simultaneously the following tasks: revised and tested proposals for building the covering; added and planned an event that would take place under the covering; decided to include a Photographic Exhibition that were part of the workshop as well as other activities that take place in the School of Architecture; carried out intensive development to obtain the needed permits and financing ; designed and developed a small marketing and communication strategy in order to insure public participation. Like all processes based on trial and error, progress was not linear, but this put to a test the team’s resilience, ability to work independently, rework designs and related tasks as well as confront complications with financing .

Faced with working against a tight deadline, with few locations suitable for the exhibition and based on the intense experience already obtained during the process, a decision was made to focus mainly on the autonomy of the form, space, schedule, construction and structure of the project. This measure, an answer to the uncertainty of the final location , required the team to be more precise and assertive in the final phase of the design process: the details of the event would be a focus on visual, structural and material “lightness”; the unknown final location required that the structure could fit in any on the anticipated locations ; the speed with which the project had to be assembled and disassembled inspired a search for structural simplicity and to introducing ideas linked to mechanics; finally being unable to alter or damage the assigned location spawned the idea of a structure that could provide its own stability .

The design gained a quality unrecognized until this moment: that of being its own means of construction. The scaffold towers, used to give height to the covering, were used as cranes and allowed the whole structure to be hoisted in one piece and faced with not being able to anchor the structure directly to the pavement, weights were placed at the base of each tower to prevent them from tipping . The structure of the covering was made from polypropylene rope, which through the use of different knots provided solutions for joints, attachments and regulated the tension needed for the proposed structural design by the team in charge of this task. This decision allowed steel cables and parts to only be used where necessary.

During 62 hours, this visual impression was part of the urban landscape. It’s aerial, immaterial and light quality complimented the diverse activities at different times of day and creating an intense ever-changing hybrid panorama. Time and reflection will confirm which aspects of this urban display created a lasting impression and which aspects will be swept from memory, a challenge this type of event always faces.

The idea was conceived by students Jaime Latorre and Pablo Retamal, beginning with the topic and assignments given during the first two-month period of the 5th Year Architecture Workshop under the guidance of Professor Juan Román, School of Architecture University of Talca. The team members are mentioned in the credits. The event held was a “cultural activity.” In order to respond to the demands of a heterogeneous audience: dance, theatre, live music (pop, rock, jazz, techno), mimes, jugglers and audiovisual presentations were included in the event. The “Registro del Taller de Obra” recorded and filmed the event. Eight other projects in “plazas” were being designed and constructed simultaneously, each with a team of forty students supervised by a professor and a coordination team from the School of Architecture. Permits were issued by the City of Talca’s Department of Culture. The project was financed by: Inmobiliaria y Constructora Independencia ($920.000), Easy S.A ($500.000), París S.A ($260.000), Universidad de Talca ($225.000), Rentamak (Loaned 30 pieces of scaffolding as well as safety equipment), Prefsen (Loaned 4 tons of prefabricated cement blocks). The artists performed for free. Information was diffused through flyers and radio. 4 spheres, constructed from grey umbrellas, were assembled and hung along Talca’s main street within sight of each other to point towards the “Plaza de Armas.” Unanticipated challenges: find 400 umbrellas of the same color after winter had already passed; lose important financing two weeks before the event because of an “inexact budget”; unstable climatic situation (sporadic rain and winds not to be underestimated); little certainty about the structural behavior of the covering because of lack of calculation models and specialists on the topic, which meant excessive overestimation for safety purposes. There were only 3 acceptable locations: the “Alameda” across from the Regional Theatre, the new pedestrian mall and the “Plaza de Armas.” The selection criteria was based on the following: high urban visibility; an area along high vehicular and pedestrian traffic routes during weekends; an area with a capacity for a large number of people and as well a “captive” audience; complimented by other leisure activities in the area. All of the previously mentioned criteria were as well decisive when obtaining financing from private companies. The location initially selected (the first pedestrian mall in Talca) was still under construction and its opening had been delayed multiple times. It became attractive to coincide the event with a previously “unknown” and recently opened public space in Talca The event took place during the 12th, 13th and 14th of September 2008. The date was chosen to coincide with the end of the “Project Workshop 2008″ as well as fall on a weekend (appropriate for these types of activities). The dimensions of the rectangle, which contained the covering and structure, were 14 meters wide by 40 meters long and 4 meters high at the lowest point. These dimensions gave an urban scale to the exhibition. The process of unloading trucks and assembling the project lasted around 17 hours, meanwhile, disassembly, loading trucks and cleanup required only 4 hours. The discrepancy in the times can be attributed fundamentally to complications at the start and for the degree of specialization required to assemble the structure, which was carried out by a small group of students with experience or that had gained experience quickly during the course of the Workshop. This, which is an obvious condition for an architectural structure, but not the condition in this case, for a structure under tension that had to be installed in an area where it was difficult to find a location on the ground to transfer loads, partly because of the impossibility of anchoring them to the pavement not designed for this purpose as well as the geometric relationship of the lines of forces between existing elements able to be used as safe attachment points. The towers, each made up of 3 scaffold frames, acted as guides for a semi-mechanical system. 6 pulleys were attached to the towers on the upper plane (1 per corner and 2 centered) and 2 parallel steel bars, located on the outside longitudinal face served a double purpose: the horizontal received one of the four ends of lashing possessed by each module and the vertical permitted the simultaneous hoisting of the 3 modules that formed the unit. The inferior plane of each of the scaffold towers was weighted down by 450kg of cement block. This allowed the center of gravity of the structure to be lowered, stabilizing it and resisting the tension produced by the covering modules. A piece of wood was added to each foot of scaffolding as well: this was done to avoid damaging the pavement in the plaza due to excessive pressure as well as increase the coefficient of friction. Although steel cable and polypropylene rope had practically the same cost, polypropylene was chosen for the majority of tensors, guy wires, tie downs and other components needed for the design, avoiding raising the final cost of the project. Steel cables were only used for tie downs (wind) on the corners for safety reasons and as a precaution (in case of an accidental or intentional cut these parts being accessible to the public).