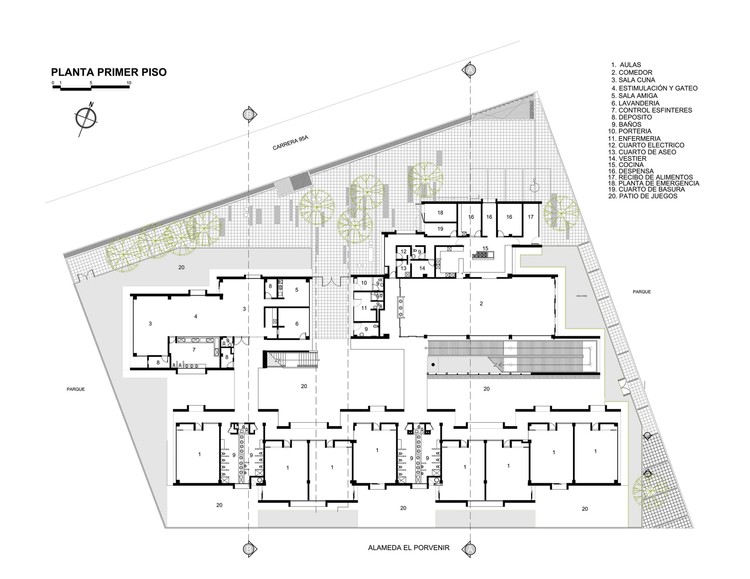 This kindergarten proposal recreates as main idea the urban life within the project. The building is understood as the very early contact between the child and the society where the formation and development process are going to begin. From this perspective the proposal reproduces a small neighborhood taking the primary elements that make up the city, the house, the street, the play park, as composition themes of the architectural scheme.

The city, the buildings as an archetype, the society’s role in children’s development become crucial ideas for the project. Urban life takes place in the street and the play park, and the classroom substitutes the house, where children can share emotions, feelings or thoughts among them, the backyard comes as a place for recreation and social interaction, synthesizing as well the architectural project as building elements.

The centralized access breaks the building and clearly indicates the kindergarten main entrance. The arrival leads directly to the central courtyard giving a direct visual relation to the ramp and staircase leading to the second level. The circulations are organized in the way of galleries attached to the volumes that surround the main street; the connection between the two programmatic bars is made by bridges. This scheme enables a quick evacuation of the project. The location of the access to exits is established as a criterion at the ends of the circulation to end the routes up in the lineal yard, this way users are taken to free areas near the main exit or emergency ones.

Since the arrival to the project a privileged relationship with the void is experienced, first a public square is home to parents and children and brings them together in a multiple uses area, this area directly leads to the courtyard between buildings /, main street that builds the project up, this area is meant to be the entertainment place where children of all ages can interact and learn in a more inclusive context. And finally as a more private space the playground take place as a classroom extension area which is the place where children are set together according to their scholar level.

Organizational System of the Project

This schema consists of two longitudinal rails that allow the architectural program organization into two distinct sectors according to the project needs, in this way the service areas have easy access from the vehicle ways, while spaces such as classrooms, requiring more privacy and independence from the rest of the system, are isolated and linked to the alameda with a lower pedestrian traffic incidence. In this sense two location fronts are characterized according to the requirements of the program. On the other hand the general image of the project is not intended to provide a specific character to the space through formalisms; instead it establishes an unique standard that adopts the program areas which achieves an uniform image and easy to remember.

The project was implemented in the north sense with a slight tilt to the west, so it was taken as a criterion a series of projecting windows from the facade as a sunbreakers, to solve the solar incidence, facades with thermal and acoustic insulation were also settled, including micro perforated sheets and blinds which allow the passage of natural light and air flows in a controlled way. The closing degree reduces to the interior of the project to allow a direct relation to the longitudinal courtyard with a series of openings that visually connect the galleries.

The spatial relations play a crucial role within the project. Neighborhood life, as a development theme can integrate in the same environment; academic, ludic and play activities. The street importance as organizational element and the void as meeting and socialization space which allow the child to grow and develop in a place that is not stranger or different from the one he already knows, instead is close to the image of his own home and his living area, this project comes to be analogous to the children’s real context.

The classroom buildings are made by a sequence of a modular element simplified in a way of shell that contains the architectural program, given the simplicity of the shapes it opted for a series holes or openings that protrude from the facade and break as well the surfaces uniformity, each of the apertures is enhanced by the use of color. 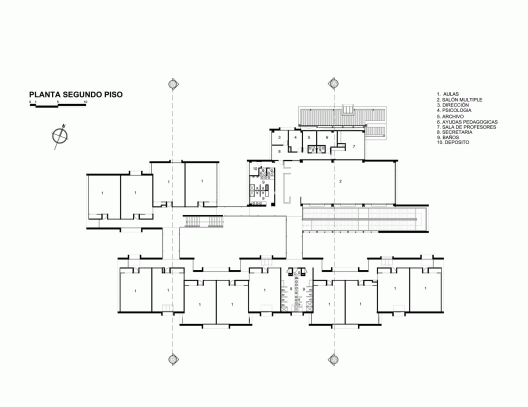 Two types of surfaces are established, the first one is highlighted by the use of a sandwich panel that folds providing a continuous and uniform image and the second one corresponds to a glass facade and a perforated colorful sheet which produces light effects inside the building.