The Phoenix Central Library stands as an iconic structure that straddles Interstate 10 as it passes through the Margaret T. Hance Deck Park Tunnel in Phoenix, Arizona. Designed by bruderDWLarchitects, the contract was awarded in 1989 and the project completed in 1995 to house an expansive volume collection of 1,000,000 within 280,000 square feet, it has also served as a catalyst to the local community and fostered a sense of pride. It features numerous details that enhance the overall user experience and incorporates strategic building tactics that respond to the harsh Sonoran Desert. More details after the break. 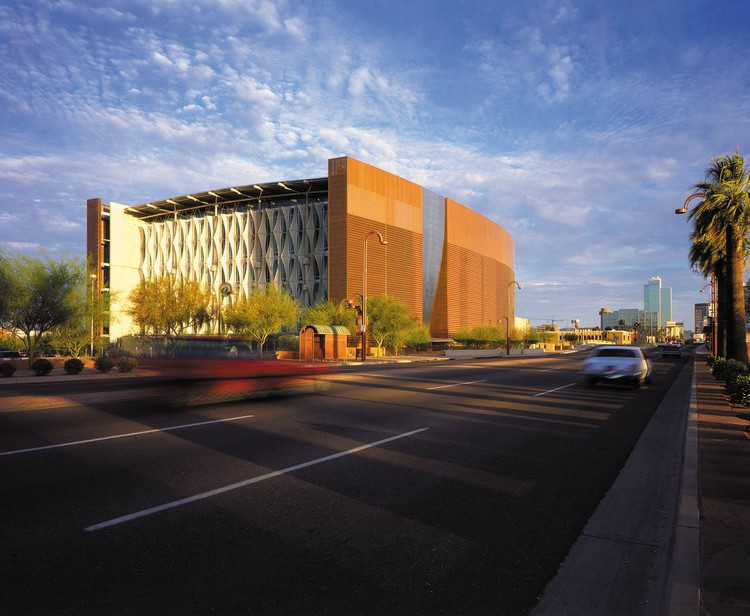 The footprint of the library takes a straightforward orthogonal approach based upon 32’-8” square bays – a measurement derived from library stack modules. These bays encompass the central atrium space which contains fully glazed elevators and a grand staircase that rise from a reflecting pool at the ground plane. A stainless steel monitor with nine tracking skylights at the crown of the atrium bathes the occupants with an animated play of light throughout the day.

The programming of the library takes place over the course of five levels, with the main occupiable space stretching out in a north-south axis. The main entry level features elements typical to the operation of libraries, such as check-out and information kiosks. As one ascends upwards, there is opportunity to explore a rare book room, an entire floor dedicated to reference and research resources, and on the top floor, the largest great reading room in North America which holds the non-fiction collection.

Of all the floors, it is perhaps, the top floor that really engages the senses with its expansive tensegrity roof structure and carefully composed structural elements that are showered with indirect light. Blue skylights above each column with miniscule clear apertures illuminate the tips of the columns at solar noon on the summer solstice. The north and south ends are completely glazed, with unencumbered views of the city.

In order to mitigate heavy dependence on mechanical systems, the glazing strategies and solid wall locations are tactical in their orientation. The East and West elevations are clad with corrugated and flat paneled copper skins with a stainless steel vertical band that serve two purposes; shielding the interior from the low angles of the sun and thus eliminating the brutal solar gain that would have otherwise resulted, and accommodating the fixed services of the building such as stairs, service elevators, mechanical, electrical, plumbing, and lateral structural systems. As a result, the main interior spaces are wholly dedicated the service of library related uses.

The south elevation which is entirely glazed features automated solar tracking louvers that abate solar gain and glare. The north elevation incorporates a unique system of shading sails that assuage summer glare whilst still enabling optimized views of the exterior. Once the sun settles behind the horizon, the glazed curtain walls empower the interior, as its internals are showcased to the community.

Constructed at a cost of $98 a square foot (1995 prices), the library is often cited as a role model for environmentally responsible architecture. Once up and running, the benefits of its upfront planning and responsiveness to the harsh desert environment resulted in an energy use reduction of one-third the amount initially predicted by utility experts and city planners.