Currently under construction, SOM’s Busan Lotte Town Tower in Busan, South Korea stands over its adjacent waterfront as the new gateway to East Asia. Rising 510 meters, this mixed-use tower will add 6.3 million square feet to this bustling port city. A unique setback language defines its massing that is derived from numerous influences including the compact site, complex program, and optimization of views. The tower will incorporate numerous sustainable features and an efficient concrete structural system that maximizes the efficiency of the 107 floors. More details after the break. 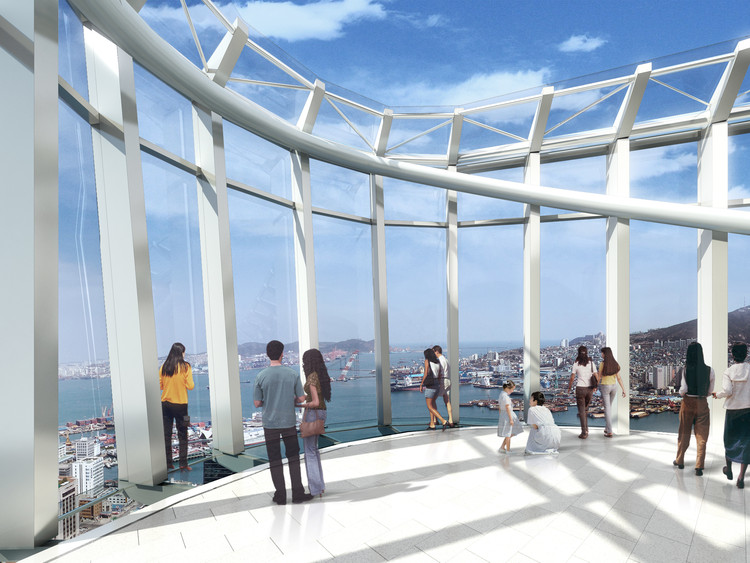 Intended to serve as a landmark to the burgeoning city of Busan, its compact site situated on a peninsula between two busy bridges was embraced as an opportunity to create a tower that engaged the senses both vertically and at the ground plane. A 24hr pedestrian walkway encompasses the base allowing free flow of pedestrian movement. Upon entry into the podium, the tower is split into quadrants that house the lobbies for their respective destinations – retail, office, hotel, and residential.

Primary program components are contained within visually discernible volumes that feature setbacks rotated in a clockwise fashion. The residential area from floors 59-77 accommodate 12 suites ranging in size from 2-3 bedrooms, while the upper portion on floors 83-98 house 9 suites. The office portions of the tower will be constructed with open floor plates allowing for custom tenant improvements. A rooftop observation deck will offer unencumbered views of the city.

High-strength concrete is utilized throughout the principal structural components. The concrete core houses all the vertical pedestrian circulation as well as the mechanical runs. Cast-in-place outrigger walls transfer the perimeter column loads to six mega-columns. The ‘Y’ shape of the buttressed structure efficiently minimizes material whilst simultaneously maximizing resistance to loading and allowing each tier to have independent column layouts suitable to its function.

According to SOM, numerous environmental controls systems will be utilized in order to reduce energy consumption, ranging from light shelves for improved daylighting to energy cogeneration techniques.