Save
In Progress: New Parliament of Georgia / CMD Ingenieros
Share
Or
Copy 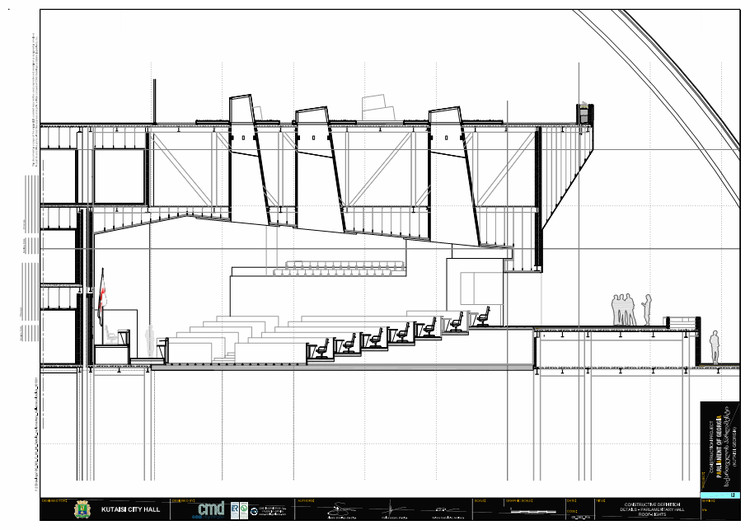 The building of the new Parliament of Georgia wants to project a modern and organic image as a reflection of the big changes that the country is experiencing. The first thing to change was the location. The new Parliament is moving from Tbilisi to Kutaisi, to a large area, which will soon become a great park hosting such this singular building.

The exterior look of the main building conveys a powerful image: a great glass and steel dome ploughed by a roof-like concrete element that rests on the vault. When the ends of this element reach the ground level they become access “mouths” for members and visitors. The contrast between these two elements both in form and material intends to recall and convey two concepts that go hand in hand; the transparency of the democratic system and the soundness of the institutional principles that the parliament of a country represent.

Forms and structural features The glass dome is an element of a great structural singularity. It will be supported by a series of 100 span transverse arches and secondary structural elements running along 150 m. The ovoid shape of the dome and the curvature and sinuosity of the covering vault make us think of an organic building, lots of curves and few straight lines. However, contrast continues being the conductor wire of the building.

Within the great glazed space emerges a new building that is structurally independent from the outer surrounding, which uses ordered orthogonal lines to organize the functional program of offices, meeting and conference rooms as well as the main institutional rooms. This interior building comprises several crisscrossed volumes connected by footbridges and vertical cores. It creates open spaces to enjoy under the glass vault.

Spaces and uses The volume for institutional uses has been organized on superimposed levels, all them interconnected by corridors and footbridges. It has been designed to arrange in an efficient way suitable uses for this kind of institutions: Plenary Hall, offices for members, meeting rooms, press and conference rooms, reserved area for the President and the Bureau.

Decreasing the surface used from down to top we can create gardened terraces to enjoy the transition space between the building and the glass dome. Vegetation forms a green and moist carpet which tries to make interior spaces more comfortable. On the lower level, bigger areas for holding receptions and exhibitions will be furnished with large flowerpots and trees, that will help create the desired atmosphere in a very easy and flexible way.

Technical features One important challenge was to provide technical facilities but preserving shape and beauty of the glass dome. The concrete belt conveys them from ground to top and makes easy the natural ventilation of the interior space. 70% of the glass panels can melt the snow avoiding extra charges over the structure on winter.

The Millennium Park The project of the New Parliament includes two other office buildings: the Staff Building, for personnel of the institution, and the House of Government, where several ministries have been moved from Tbilisi. It has also conference rooms, press rooms and spaces for meetings of the Prime Minister and the Government of Georgia. Surrounding all them we can find the Millennium Park, a large green area closely connected with the design of the Parliament, as it defines the different accesses to that building. Landscaping preserves as much as possible the natural atmospheres and using innovative and integrated designs.