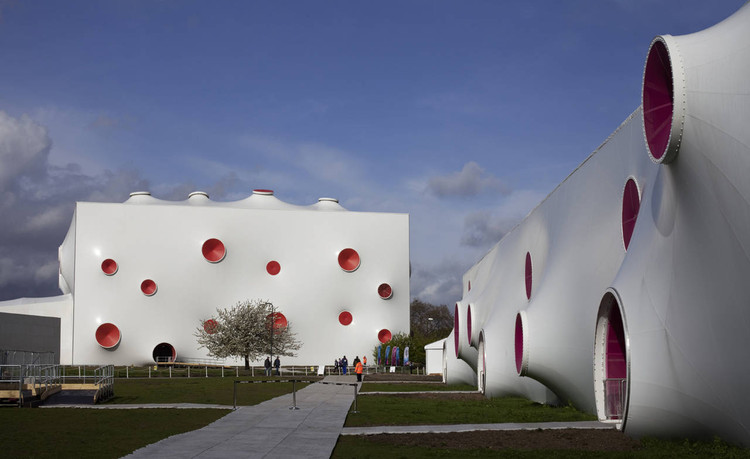 The London Shooting Venue will accommodate the events in 10, 25 and 50 m Sport Shooting at the 2012 Olympic and Paralympic Games in the southeast London district of Woolwich. The first Gold Medal of the London Olympic Games will be awarded at the venue for Women’s 10 m Air Pistol on the 28th July 2012. After the event the three temporary and mobile buildings will be dismantled and it is planned to rebuild them in Glasgow for the 2014 Commonwealth Games.

Shooting is a sport in which the results and progress of the competition are hardly visible to the eye of the spectator. The design of the shooting venue was driven by the desire to evoke an experience of flow and precision inherent in the shooting sport through the dynamically curving space. All three ranges were configured in a crisp, white double curved membrane façade studded with vibrantly colored openings. As well as animating the façade these dots operate as tensioning nodes. The 18.000 m² of phthalate-free pvc membrane functions best in this stretched format as it prevents the façade from flapping in the wind. The openings also act as ventilation intake and doorways at ground level. The fresh and light appearance of the buildings enhances the festive and celebrative character of the Olympic event.

The shooting venue is not situated in the Olympic Park, but has its own location in Woolwich on the grounds of the historic Royal Artillery Barracks. It is estimated that more than 104.000 spectators will watch the competitions. The three buildings comprise 3.800 seats divided between two partially enclosed ranges for the 25 and 10/50 m qualifying rounds and a fully enclosed finals range. Together they form a campus on the green field. Their up to 107 m long facades refer to the structured length of the Royal Artillery Barracks building, but have their own contemporary architectural expression.

Guided by the high requirements from the client, the Olympic Delivery Authority, sustainability was a key factor in shaping the design. All materials will be reused or recycled. All three of the venues are fully mobile, every joint has been designed so it can be reassembled; and no composite materials or adhesives were used. In addition, the semitransparent facades on two of the three ranges reduce the need for artificial lighting and the ventilation is fully natural. The tensioning detail was achieved through an efficient configuration of modular steel components commonly used in temporary buildings market. The double-curvature geometry is a result of the optimal use of the membrane material.