Save
Kevin Roche: Architecture as Environment
Share
Or
Copy

Kevin Roche: Architecture as Environment will be opening June 16th, 2012 at the National Building Museum in Washington, D.C. The exhibit, organized by Yale Institute, will celebrate Kevin Roche’s expansive portfolio, from his early days as Eero Saarinen’s “right-hand man” through the founding of his practice in the 1960s with John Dinkeloo (KRJDA). The exhibit will include images, drawings, interviews, models, as well as original slide presentations to clients. More on the exhibit after the break. 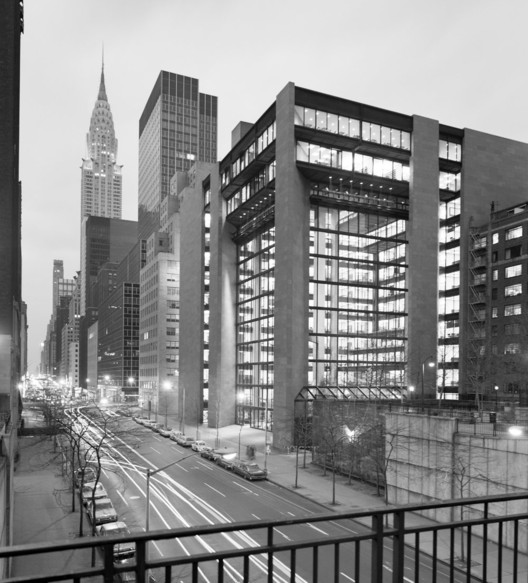 Kevin Roche is the recipient of numerous architectural accolades: the Pritzker Prize (1982), the American Institute of Architects’ Gold Medal (1993), Firm Award (1974), and Twenty-Five Year Award (1995, for the Ford Foundation Headquarters). The majority of his work encompasses civic concerns: transportation, infrastructure and public space are prevalent themes addressed in many of his projects. His interests in the economic and cultural aspects of the built environment may have been the reason why much of his work is for large scale offices and corporations.

Well-known projects include The Knights of Columbus Building in Connecticut, The Ford Foundation Building in New York, renovations to the Metropolitan Museum of Art in New York and the TWA Terminal, designed with Eero Saarinen.

Roche worked at Eero Saarinen’s office until Saarinen’s untimely death in 1961. Suddenly, Roche found himself in the position of lead designer. The office continued with partners John Dinkeloo and Joseph Lacy until the last of Saarinen’s projects were completed. By then, the architects had gained attention on their own and launched Kevin Roche John Dinkeloo and Associates (KRJDA) in 1966. Yale School of Architecture associate professor Eeva-Liisa Pelkonen conducted a series of interviews Kevin Roche, addressing this turning point in his profession. The monograph is published in conjunction with the exhibit. Excerpts from the interviews can be read here.