Starting tomorrow, the 12th version of the Serpentine Gallery Pavilion will be open at the Hyde Park in London. As we announced some months ago, the design was commissioned to Herzog & de Meuron and Ai Weiwei. The final proposal was published just at the beginning of this month, showing an interesting ground work. This year’s pavilion is half sunk into the landscape, as if it were carved in the terrain and covered with a liquid layer, reflecting the the surrounding light and landscape. 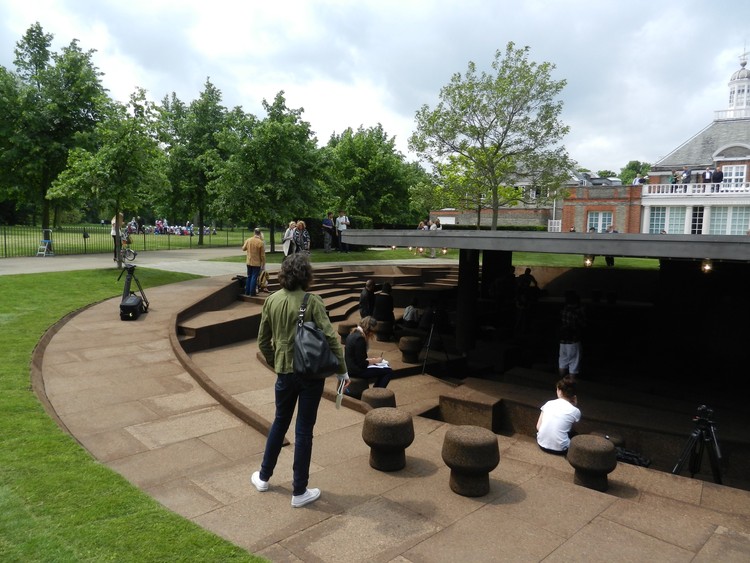 More info and images after the break

This year’s Pavilion will take visitors beneath the Serpentine’s lawn to explore the hidden history of its previous Pavilions. Eleven columns characterising each past  Pavilion and a twelfth column will support a floating platform roof 1.5 metres above  ground. Taking an archaeological approach, the architects have created a design that will inspire visitors to look beneath the surface of the park as well as back in time across the ghosts of the earlier structures.

Julia Peyton-Jones, Director, and Hans Ulrich Obrist, Co-Director, Serpentine Gallery, said: “It is a great honour to be working with Herzog & de Meuron and Ai Weiwei. We are delighted that our annual commission will bring this unique architectural collaboration to Europe to mark the continuity between the Beijing 2008 and the London 2012 Games.”