Save
In Progress: Perathoner / Bergmeister Wolf Architekten
Share
Or
Copy 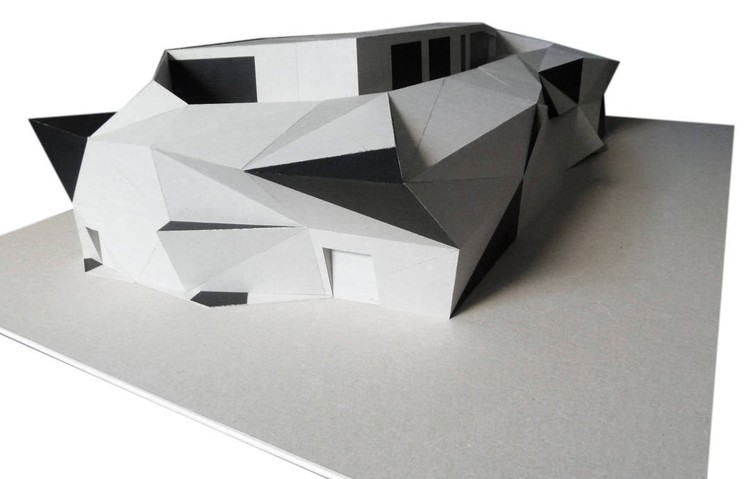 The estate in exceptional location – roundabout Pontives – the street leads to Gröden from Klausen and Bozen – is the obvious place for the new construction of the wood carving Perathoner. The new building should point out the long tradition of Gröden’s craft industry and the material wood. The corporate identity of wood carving should be expressed by the outside as well as inside: in this building valuable art objects are produced. The building should tempt the passers-by to stop and arouse their interest.

We were especially inspired by the wood carver’s tools and enthused about their technical abilities. So the basic idea generated and the blueprint absorbed the wood carver’s passion. Starting from a raw wooden block this basic idea was further developed. The treating of wood, the emergence of cuts become the core topic. With the facets of the wood the desired movement in architecture is expressed. The building gets the impression of a living façade, the movement, the constantly new point of views, the change of colour of the wood become clearly visible. It is part of the ongoing changes during the artistic process of the craftsman. The façade also appears like that: a movement, a bend, a fold, a change. The building arouses curiosity because of the folds, dents, cuts and openings. It was a central aspect to create just one single façade at this traffic junction , to transform the 4 or 5 facades into one.

The façade consists of a self-supporting folding system made of triangles. Within this system openings are created to give sufficient illumination. Nevertheless, a homogenous picture is created. The dress or better the cladding of the building, the façade, should be covered with shingles. This type of cover associates with the rough, unfinished surface of a wooden block. The irregular ageing of the shingles moreover strengthens the idea of an unfinished sculpture. The project becomes part of the craft industry, which is located inside – it turns into the worked wooden block. At night the light which shines through the openings and folds creates a unique picture. The light becomes part of the whole- of the concept: the display of the valueables inside.

The building possesses the power to stand on its own, like a character, a sculpture. Nevertheless, it doesn’t turn away from the neighborhood, but becomes part of it, with its view of the in- and outside. It is orientated towards the roundabout and also opens in that direction: on the ground floor a spacious exhibition area is located, which in parts stretches over two floors. The bends – the dents, the handcraft can be felt not only at the façade but also inside. Simple, original and unspoilt materials, like natural steel, glass and wood which harmonize very well, were used.

The facade turns partly into a parapet in the upper area und allows a shielded form of living on the roof with a roof-terrace. The quiet apartment is completely integrated in the façade. It is closed towards the street, but opens towards the terrace, the landscape. It remains part of the whole, is not visible from below and ensures privacy.