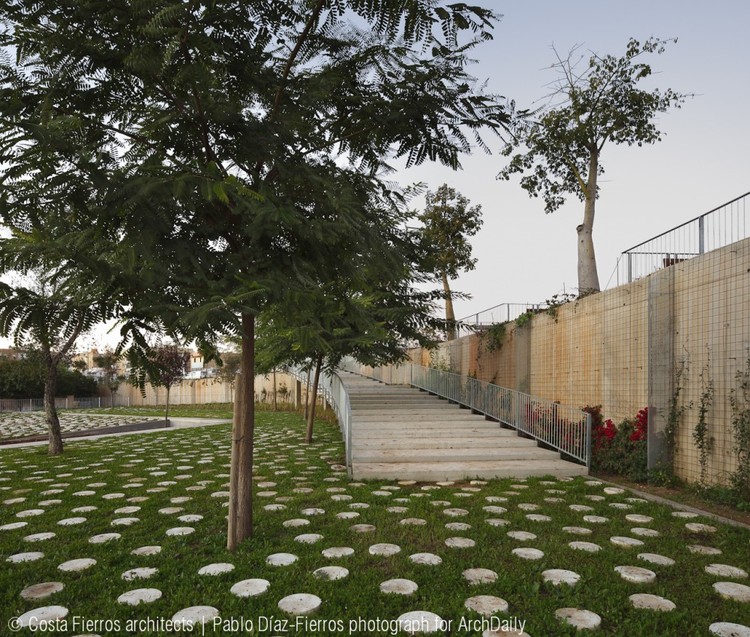 The Park is located in an existing degraded area, lacking of facilities, and known historically as a land dividing the nearby quarters (Águilas and Los Prunos neighborhoods) and isolating their inhabitants.

Before the construction of Underground Line 1 was undertaken, this area was used as the official premises for Seville’s (tour) horse carriage owners as well as later housing the constructions for the initial attempt to build the city’s underground in the 70′s. As the Line 1 was to pass through these neighborhood, the opportunity to revaluate the land surrounding the underground station there arouse, and the Underground project was the starting point for considering the area renovation and providing the station with a quality landscape.

Cocheras Station was open in 2009. It is slightly below ground level and partly buried, and the underground trains that come from the subterranean part need a steep slope to reach the station level and get to the SE-30 highway bridge level later, meaning that the concrete underground tunnel through which the tracks pass rises up to a maximum height of 7m, acting as a solid physical barrier between the two neighborhoods.

Parque de la Música is a unique masterplan in terms of urban renovation and integration linked to Sevilla Underground infrastructure works, initiated in January 2009. During the design phases (2006-2008) the project was developed in an active collaboration with the local neighbors associations from the nearby quarters (Águilas, los Prunos). The most significant contributions accepted by the public developer Junta de Andalucía was to improve accessibility to the station and through the park with lifts and escalator.

The Park area is 32.487 m2 and ensures accessibility to Cocheras Station, located at the centre of the Park, and the connectivity between the houses located at both sides of the station.

The new landscape created helps to enjoy a walk around it or having a rest in the designated areas of the park, and the continuity of the different urban itineraries, making them more convenient and accessible for everybody.There is a dual purpose: a more cohesive city, regenerated and with better internal connections, and providing a more human and better quality outdoor space and therefore better quality of life for their inhabitants.The park is organized along a North-South promenade that reaches the station level with a gentle slope. Other transversal circulations connect the main promenade with the surrounding streets and plazas.

In the East side, the level difference is solved with retaining walls embracing and protecting the plazas at the surrounding neighborhoods levels. There is a lift and an escalator next to the station entrance for accessibility.

In the West side, the level difference is resolved with a retaining wall that goes parallel to the underground tunnel and curves itself creating the ramp directing to the main West entrance. There is another lift for access at the corner between the pedestrian street Águila Marina and Águila de Oro street.

First quality pavement materials have been used: ceramic tiles, lime and granite stones. The patterns are repeated creating a geometry that connects all the different areas in the park. This pattern is inspired in an existing ceramic pattern in the Patio de Muñecas from the Reales Alcazares in Seville.

One of the geometry pattern is a combination of 6x2m rectangles stones and ground cover, forming a obstacles free carpet that allows always complete visibility of the surroundings providing comfort and a feeling of safety from all locations. The ground covers also fill the retaining walls to the plazas that are rotated East, providing color and textures to them.

The curved wall, 274m long and with a maximum height of 7m, transforms itself into a vegetable painting as it contains 24 different varieties from 18 grass species, all of them carefully selected depending on their location, orientation, compatibility, color and scent.There are also two hundred of trees from 23 different species, selected due to their size, foliage, flowers, shadow qualities, fruits and symbolism. There are perennial trees, providing green all year long, deciduous trees, that will announce the springs and the autumns, and semi-perennial leaf trees, blossom at different times of the year, providing together with the flower blossom true plant calendar. It has been also always considered the use of local and low maintenance plants and trees.