The International jury, chaired by Prof. Jörg Friedrich (Hamburg), has awarded two second-place and two third-place prizes in the worldwide, open architectural design competition for the New Bauhaus Museum in Weimar. The purpose of the competition is to find an architecturally innovative, sustainable, energy-efficient and museologically sound solution for a new museum that takes full advantage of the urban-planning potential of the Weimarhallenpark. The announcement of the winners officially concludes the architectural design competition, in which 536 architectural offices around the world participated.

Continue after the break for more information and project descriptions. 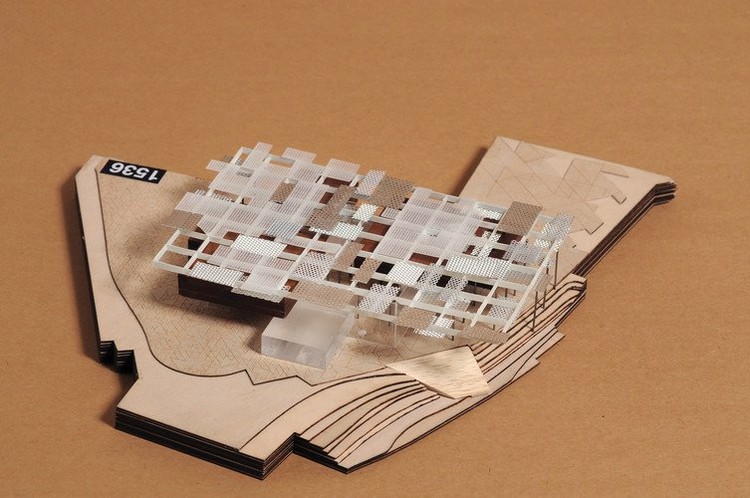 With the conclusion of the competition process, the Klassik Stiftung Weimar can now begin negotiating with the four prize winners according to VOF procedure (Contracting Regulations for the Awarding of Professional Services) as put forth in the call for proposals. The jury provided the winners with recommendations for optimizing their proposals in preparation for the procedure. The Klassik Stiftung Weimar intends to quickly begin negotiations in order to proceed with the concrete construction planning without delay.

The New Bauhaus Museum will officially open in 2015 with an estimated cost of €22 million.

The second-place design proposal by Johann Bierkandt (Landau) develops the figuration of a small-scale, urban museum ensemble, distinctly separate from the large-scale Weimarhalle and the Thuringian State and Administrative Office nearby, as well as the adjacent residential buildings. The proposal doesn’t aim to present a compact museum, but rather includes additive structural elements which play on the differentiated educational concept of the Bauhaus. The jury expressed its admiration for how the proposal integrated the museum with the Weimarhallenpark.

The other second-place proposal by the Architekten HK (Klaus Krauss and Rolf Kursawe, Cologne) provides excellent access to the park. The distinctive form of the museum makes an even stronger impression in the urban setting and is characterized by the cleverly staggered arrangement of the elongated structures. The proposal is also impressive in terms of its interior design qualities. The central interior space creates a distinctive, independent and attractive flair for the New Bauhaus Museum.

The third-place design proposal by Prof. Heike Hanada with Benedikt Tonnon (Berlin) positions a compact minimalistic cube on the park slope, a geometrically elementary architectural form, which would offer enormous potential for the interior corridors and room arrangement.

The museum design proposed by the second third-place winner Bube/ Daniela Bergmann (Rotterdam) features a composition of three translucent structures which lie somewhat removed in a newly won park environment. This concept also consciously sets itself apart from the dominating habitus of the large former Gauforum and the neighboring Weimarhalle.

The three honorable mentions distinguish proposals which offer outstanding individual aspects and valuable contributions for the construction of the museum in this difficult urban-planning environment. Viewed in their entirety, however, their implementation is not possible.

All proposals of the second round are on public display at the Neues Museum in Weimar until April 9th, 2012.