The Croatian/Austrian Design Collaborative Numen/For Use blends architecture and public installation art. The sculpture-like pieces are large in scale and take over whole public spaces while also reinventing them, changing the way in which they can be occupied and changing the experience of the interactions between participants. Numen/For Use has shared with us three of their recent works. Tape, which was actualized in Florence, Italy and Melbourne, Australia; Tuft Pula, a more permanent version of Tape installed in the middle of the former church in Pula; and Net, built in Z33 high spaces. Tape and NET take a material that is ephemeral and non architectural and turn it into one that has architectural capacity. Join us after the break to read more about these projects! 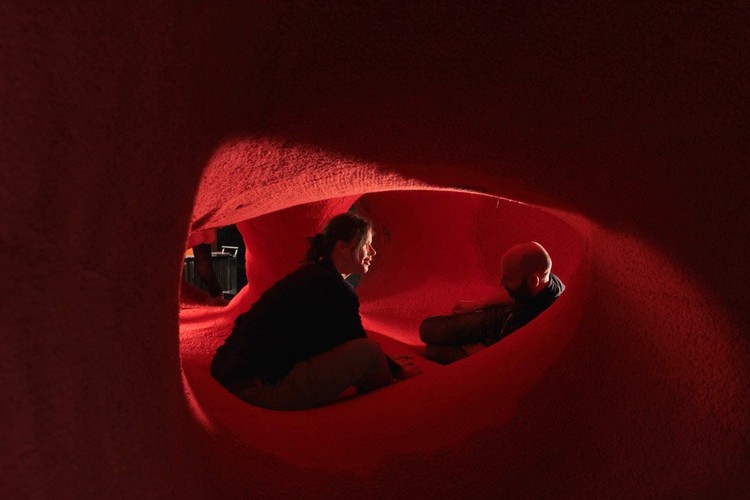 The video above shows the installation of the site specific installation, Tape Florence in the piazza of Palazzo Strozzi in Florence, Italy.  This project spatially redefines the already public and occupied space of the piazza, adding a new dimension to the experience of public space.  In this otherwise two dimensional space, the intervention by design collaborative Numen gives people the opportunity to be above and below while occupying the same part of the piazza.  In this case the piazza acquires an additional level, an additional interiority nestled between the pillars of the interior courtyard of the building. Tape Melbourne, which can be viewed in the gallery below, was a similar installation of this pliable public art, spanning over an outdoor amphitheater six meters above the ground. The installation appears to be an organism that has affixed itself to the architecture.

The concept of the form was sculpted by the movement of dancers moving between pillars in a sequence.  The tape is an artifact of their motions through space and leaves behind an architectural form that can be reused.   The tape is stretched between the pillars of Palazzo Strozzi first forming an intricate web that serves as a framing that will then become the boundary between inside and outside.  A second layer of tape is then spun in a perpendicular direction encapsulating the space  and effectively making it occupiable.

In regards to the Tape installations, Numen says, “The  interior of the structure is supple, elastic, and pliable while the form itself is statically perfect, as it ideally follows the trajectories of forces, being literally defined by them. In the moment when the audience enters the installation, what started off as a sculpture seamlessly morphs into architecture.”

To push this Tape concept beyond the ephemeral, Numen / For Use developed Tuft, which is a more permanent, self-standing structure that can be moved from place to place.  Tuft is precision crafted to develop the same types of organic curves created by the adhesive tape, which was used to generate the primary form from which a Croatian factory Regeneracija constructed the final form.  The interior, occupied space of Tuft is a soft, carpet-like surface.  The exterior is the rough, industrial surface of framing and production, exposed to “serve as a counterpoint to the invitingly soft, carnal interior”.

“The result is a surreal simultaneous feeling of anxiety and thrill whilst entering into the installation. After the initial caution, the user starts perceiving the functional aspect of the installation, utilizing the softness and sound isolation of the installation and using it as an inward facing collective sofa”, says Numen / For Use.

NET, in the video above, was installed for Z33′s high spaces.  This space is something that Numen calls “Transparent Landscapes” and creates a layering of levels that are transparent.   The inspiration, as Numen puts it, came from a design to reinvent the concept of a backyard and to recreate the sensation of flying.  The social concern behind NET is to create a public balcony – a transparent space, accessible to a population alienated by suburban living, reconnecting backyards to form community spaces.

The catenary curves begin to emerge as the first net goes up and is affixed to the ceiling.  The next set of nets are connected to the peripheral walls and then the nets are strung together creating hills and valleys, connections to above and below, all while maintaining the sense of levitation and instability.