‘The Fabergé Big Egg Hunt’, launched on the 21st of February, has provided London, England with 209 giant and stunningly crafted Easter eggs, designed by artists, architects, jewelers and designers. The four presented here were designed by architects Zaha Hadid, Sir Nicholas Grimshaw, Fourfoursixsix and interior design firm Candy & Candy. The designs are unique, structural and conceptual. Thirty-one among the 200 will be chosen for a live auction on March 20th. The rest can be bid on on-line. The proceeds from the auction will go towards the £2million target for Action for Children, a charity for vulnerable and neglected children, young people and families, and Elephant Family, a charity for the endangered Asian elephant. This Easter egg hunt invites the whole public to participate in finding these eggs throughout the city; the scale of this event is set to break Guinness World Records for the most participants in an Easter egg hunt.

Read on to see the designs after the break. 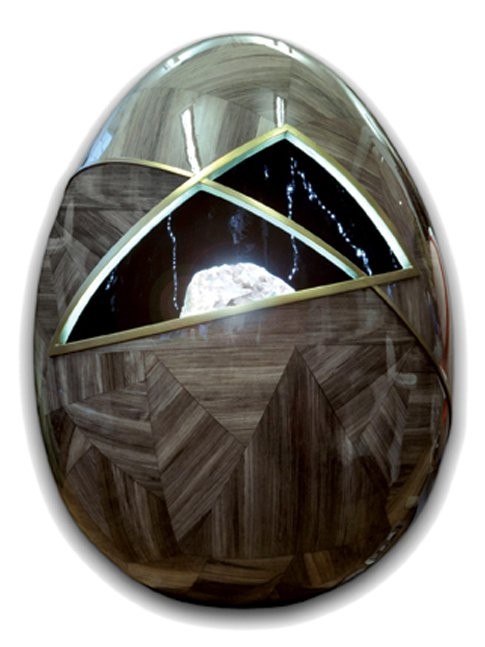 Currently the highest bid, “Dichotomy” by Zaha Hadid will be among the 31 eggs going to live auction tomorrow, March 20th. The egg reads like a topography that begins at the surfaces and plunges into the void of the egg. The lines that carve the egg follow the curvature of the surface, creating a fluid reading between outside and inside. It promises to invite views into “a journey of discovery into the very DNA of its creation”.

“The Anatomy of a Building” by Sir Nicholas Grimshaw will also be going to live auction. At first glance the design appears to be a collection of architectural samples, arranged by color and material, creating a smooth gradient along the surface of the egg. Upon further inspection it is clears that, yes, these are architectural materials, organized by color and composition. But these are not samples; the egg is composed of materials salvaged directly from Grimshaw’s latest project making this egg a taxonomy of material choices from structure to fascia to interior design. Stacking, stratifying, bolting, snapping and hinging can all be read among the properties of the composite design of the egg.

Fourfoursixsix describe “OVO” as a three dimensional architectural terrain that describes structure through light and shadow, principles that govern the overall geometric form. The egg is composed of a reiterative overlay of rational grid, broken into facets which each have an aperture. The patterns along the surface of the egg changes with its curvature creating different conditions of light and shadow. “Working with EOS and Ogle Models has enabled the construction of a delicate, intricate and complex piece, at the forefront of three dimensional printing technology”, says the architecture firm. The thin complex components of the design are likened to the original Fabergé concept, at a larger scale in 21st century. This design will also be going to live auction on March 20th.

Also going to live auction is Candy & Candy’s “Inception” is a product of traditional craftsmanship starting with the selection of fine materials through the design and manufacturing of the final product. This egg literally has an interior and an exterior. The shell is two dimensionally faceted and polished, lined with a metal band that frames a single aperture, revealing the glowing center. Historically, the egg symbolizes life and rebirth and in this design, the center is the origin and conception of ideas.

If you’re in London and need help with a few of the 209, check out these zone maps for tips. Each two and a half foot fiberglass sculpture will take its place in the hunt throughout the 12 egg zones across London, and come together for The Grand Eggstavaganza on the Easter weekend. View the entire collection and bid on the remaining eggs Thursday 5th to Monday 9th April.