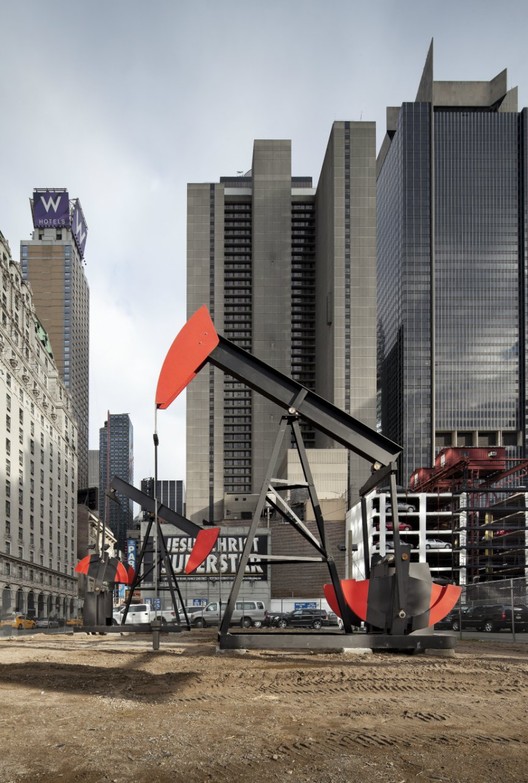 Manhattan Oil Project, presented by the Art Production Fund, is comprised of two new monumental kinetic, steel sculptures, each standing 25 feet tall. These full-scale sculptures are inspired by mid-20th century oil pumps that the artist discovered in Electra, a boarded-up town once famous for being the pump jack capital of Texas. Each sculpture is fully motorized to simulate the motions of a working oil pump two times a day in four-hour shifts. Placed in a vacant lot, the black and red steel structures slowly creak in the ceaseless oscillations of phantom oil excavation. This project is will be on display until May 6, 2012.

“I hope to draw parallels between the American industrial system, transitioning from a past of heavy industry, factories, and teamsters and the disembodied present of electronic mass-media, surface advertising, and consumerism – so clearly embodied in Times Square,” said artist Josephine Meckseper. “The critical placement of the pumps is a conceptual gesture that raises questions about business and capital; land use and resources; wealth and decay; decadence and dependence.”

The second sculpture, Soñando New York (Dreaming New York) is presented by Hollis Taggart Galleries in partnership with the Armory Show. The approximately 6-foot tall, pleated sculpture is hand-carved from a single block of Carrara marble. The artist, Uruguayan sculptor Pablo Atchugarry, is a direct carver, meaning he works directly on the material, without sketches. The sculpture will be on display in Duffy Square from now to Monday, March 12.

“I want Dreaming New York to be a tribute to this marvelous city, where one can feel the spirit of freedom,” said artist Pablo Atchugarry. “The sculpture’s vertical tension, realized through the Carrara marble, symbolizes the soaring heights of the city, its vital energy, and the ideals and dreams of those who inhabit it.”

“Both of these sculptures showcase Times Square’s commitment to the promotion of the Armory Show and contemporary international artists,” said Tim Tompkins, President of the Times Square Alliance. “Soñando New York’s smooth folds of marble provide a moment of reflection while the pump jacks in an empty lot comment on the center of New York City as a center of commercial culture.”