Save
Lebbeus Woods: Early Drawings on Exhibit in NYC
Share
Or
Copy

Lebbeus Woods is well known for his conceptual drawings that bring new worlds and spaces into the eyes of their viewers. In four decades, Woods has shared his imagined worlds, expressing ideas about spaces, inhabitation and technology, and outlined alternate futures. Through April 6th, Friedman Benda Gallery will be exhibiting Lebbeus Woods: Early Drawings from the 1980s, many of which have never been displayed before. The gallery is located 515 West 26th Street in New York City. A preview of the exhibit after the break! 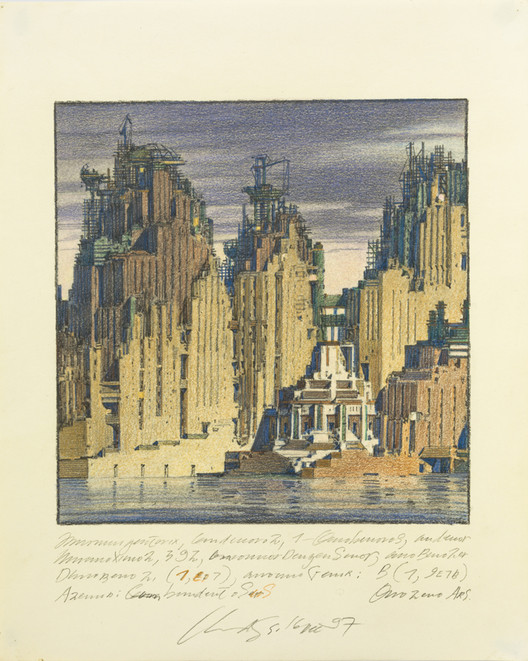 Many of Woods’ drawings evoke a sense of deconstruction alongside construction. The structures are at once falling apart and rising up again, amalgamating parts of the environment, growing organically out of what is left behind. They are reminiscent of Giambattista Piranesi - bringing a sublimity of ruin and rebirth into the scenes.

The early drawings in the exhibit reveals interests in Romanticism and in the landscape which offer an introduction to projects such as Centricity and A-City, each of which infuse a political idea into the organization of architecture and its relationship to social order.  Woods explores and develops ideas about existing metropolises such as Paris and Berlin and works out machines and mechanical structures.

The gallery also includes Woods’ proposal for the New York Penn Yards, focusing on the reuse of abandoned space which serves as a preface to the direction in which his work began to develop in the 1990s.

Lebbeus Woods was born in Lansing, Michigan, in 1940. The son of an accomplished military engineer, he worked with Kevin Roche at Eero Saarinen and Associates before turning decisively, in the mid-1970s, to independent, conceptual work staged through drawings, models, and installations. He co-founded the Research Institute for Experimental Architecture and is a Professor of Architecture at the Cooper Union as well as a lecturer at the European Graduate School. The author of many books and subject of many exhibitions worldwide, his writings and drawings have inspired architects, film directors, story-writers, and dreamers of all kinds. Woodsʼ drawings are held in numerous public collections, including the Museum of Modern Art, New York; the Cooper-Hewitt National Design Museum; the Whitney Museum of American Art; the San Francisco Museum of Modern Art; the Carnegie Museum of Modern Art; the Getty Research Institute; and the Museum für angewandte Kunst (MAK), Vienna

Friedman Benda Gallery is located at 515 West 26th St in NYC, NY. The gallery is open Tuesdays to Saturdays 10am – 6pm.