The winning proposal centers a new environmentally friendly district along the high-speed rail line, linking the national capital to the port city of Tianjin while leveraging the economic and lifestyle assets of the Beijing-Tianjin corridor. The city expansion will bring 17.6 million square meters of mixed-use development, with a focus on providing a premier headquarters location for advanced industries in the dynamically growing Bohai Rim, a region that already accounts for more than a quarter of China’s GDP. 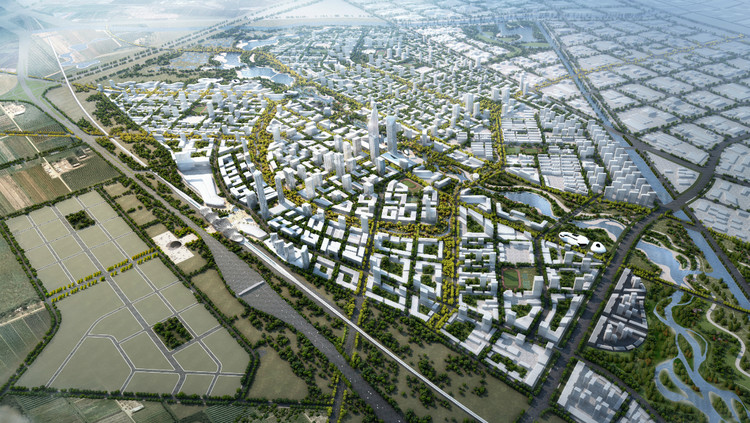 With half the 1,473-hectare site allocated to open space and nature, Beijing Bohai Innovation City builds upon SOM’s more than seven years of sustainable, high-performance city design throughout the region – from its award-winning green Beijing CBD expansion master plan to numerous projects in Tianjin, including the rapidly rising Yujiapu Financial District.

The client commented on the winning design scheme in a written statement, “SOM has designed a human and family-oriented mixed-use urban community within an environmentally friendly framework to attract talented people and forward-thinking Chinese and international firms that want to position themselves in the same way.”

“This project underlines China’s commitment to transit-based and environmentally sensitive planning. There is tremendous potential here, and we would like to work with the District Government, Development Company and other stakeholders to further define the character of the city and tailor it to meet the needs and desires of the people and industries that will make Beijing Bohai Innovation City a national model for the country’s next generation of satellite city development,” said SOM global planning partner Philip J. Enquist.

The plan also provides an advanced multi-modal transportation network highlighted by the city’s close proximity to the existing capital airport and a potential new international airport south of Beijing. By uniting high-speed rail with metro lines, bus rapid transit, local streetcar and a state-of-the-art electric car fleet, the plan enables 80 percent of the city’s personal transportation to be by transit, walking and bicycling. Combined with pedestrian and bicycle friendly street design, this network conveniently connects residents to neighboring workplaces, schools and cultural amenities along green streets and corridors.