Placing second, behind Sou Fujimoto Architects’ winning proposal, the Austrian practice soma proposed a new tower typology, titled Fibrous Tower of Multiple Natures, for the Taiwan Tower International Competition in Taichung, Taiwan. The conceptual drive for this tower comes from the desire to create a cultural landmark whose associations are multiple and dynamic, adapting with changing ideas about the nature of a skyscraper in an urban environment. Soma writes, “the tower should not state a fixed message, but trigger people to invent their own interpretations of the tower’s meaning”. How does soma accomplish this? Read on to find out. 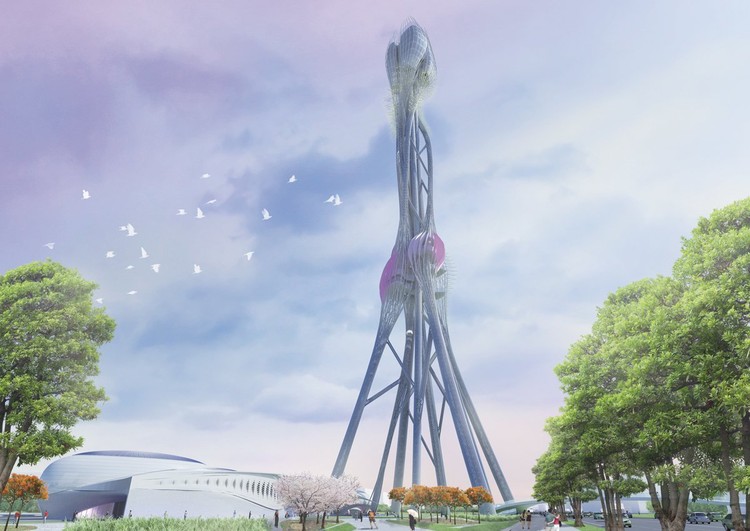 The Fibrous Tower rises as a vertical typology, but dissolves as it reaches it base where legs come touch down and form a landscape where people can move freely between them. The structure and canopy below have a cellular, “non-hierarchical” structure that produce building volumes, open areas and green space between path networks. The four inner legs have individual functions associated with circulation and access to the tower that rises above: panoramic elevators, fire elevators and emergency stairs. The outer legs expand outward, creating platforms and observatories for public use. From these observation decks, visitors can see the detailed structure of these legs, which at this distance are interpreted as tubes, woven and subdividing into different functions. From a distance, these tubes appear to be of one structure.

The design was developed using swarm intelligence system – a bottom-up processing that uses algorithms that imitate natural biological processes and applies them to digital models. The organization developed in this design created the performative fibrous structure and is just one solution chosen out of the many possible by this process. Once a scheme was chosen, the architects applied functional constrictions and further developed the design with a structural analysis. Soma writes, “Taiwan Tower will be a showcase for future architecture that learns from nature and deploys its underlying principles.” The tower is in a sense, biomimetic, in that it is calibrated to respond to the environment and adjust for the comfort of its inhabitants. These processes are observeable at the eco-laboratories:

Visitors can observe how piezoelectric halms produce energy by movement and transform them into light at night, resembling floating swarms of particles. The biomimetic lamellas adapt to weather conditions by opening and closing and protect the visitors from sun and wind. They are up to 20 meter high, but move in an almost weightless way, triggered by minimal energy and inspired by natural opening mechanisms of flowers. The tower itself becomes a fully integrated part of the exhibition; it displays how the responsible use of natural resources can lead to architectural innovation and investigation that speaks to peoples’ imagination and emotions.

The tower is designed as a zero-carbon building.  Designed to function as a self-sufficient system, it supples 100% of its own energy from renewable onsite energy generation.  Photovoltaic cells are integrated into the roof areas of the museum and exhibition spaces.  Highly efficient crystalline modules are applied to opaque roof areas and semi-transparent cell types are used where daylight is used to light the spaces below.  PV modules here are used for both energy production and shading.  A flexible PV system will also be applied to the tower’s skin, transforming the entire building into an solar absorber.  Soma also points out that diffuse solar radiation is at 60% in Taiwan, making it just as efficient to place PV cells outside the range of horizontal or south-facing orientations.  Soma estimates that the total area for solar absorbtion is approximately 25,000 m2.

Being the main landmark of the park, soma placed the tower on the eastern portion of the site where it is visible throughout the park.  The tower connects visitors to the green spaces and landscape areas.  With the museum situated adjacent to the tower, it redirects people to and from this two cultural centers.  The museum is also the connection to the existing urban fabric. The museum is composed of smaller exhibition spaces that reflect the scale of the neighborhood.  The tower departs from homogeneity across the site with its variable legs and cellular structure, along with the landscape that is full of shading trees, cooling poinds and pavilions that create different spaces within the park, various focal points and microclimates within the park.

The ground floor of the building is composed of the Taichung City Museum and the tower lobby.  Upper exhibition spaces form the three dimensional ceiling of the lobby, collapsing the experience of these two distinct programs.  The museum has three distinct spaces: back rooms for multimedia installations, zones for introductive exhibitions and daylight areas for integrated galleries with the exhibition halls.  This last space also functions as a lounge with views of the tower and park.  The tower is also accessible through the museum allowing for greater flexibility of circulation throughout the tower.

The structural typology, as developed by BGS Engineers, is not traditional. BGS writes, “a bottom-up method is established, that leads to a structure with emergent load bearing capacities. By using probabilistic optimization methods complexity in the topology of structures is achievable: they are directly derived from static capacities, but do not explicitly show the underlying load bearing principles. The inherent load bearing quality is not readable at first glance and emerges as the result of the complex interaction between its single members.”

To acheive a stable and stiff structure, the eight tower legs had to be connected by diagonal beams. The beams were a flexible component throughout the design process and the final solution came from 2,500,000 other alternatives. A genetic algorithm controlled the process and at each stage the solutions were tested for feasibility. The interaction of each member had to be taken into account at each calculation step, with many variances. The variables included varying diameters, how the tubes could be bundled, their wind resistances, among many others.

In the end, the bundled tubes served as a great advantage: availability, ease of construction and beneficial air drag – very similar to the growth of muscles or tree fibers. The specialized system of construction, necesitated by the initial design strategy, helped develop a high performance, high efficiency design that takes a lesson from natural processes and pushes them to work to the design’s advantage.