Save
In Progress: One Ocean / soma
Share
Or
Copy

Construction on soma‘s “One Ocean” thematic pavilion is currently well underway and scheduled for completion in May 2012. Selected as the first prize winner of an open international competition in Yeosu, South Korea, the thematic pavilion was designed to embody the Expo’s theme “The Living Ocean and Coast” and transform it into a three-dimensional “multi-layered” architectural experience. The goal of the Expo is to portray the responsible use of natural materials, which has been embedded into the sustainable climate design and the biomimetic aspects of the facade of “One Ocean”. 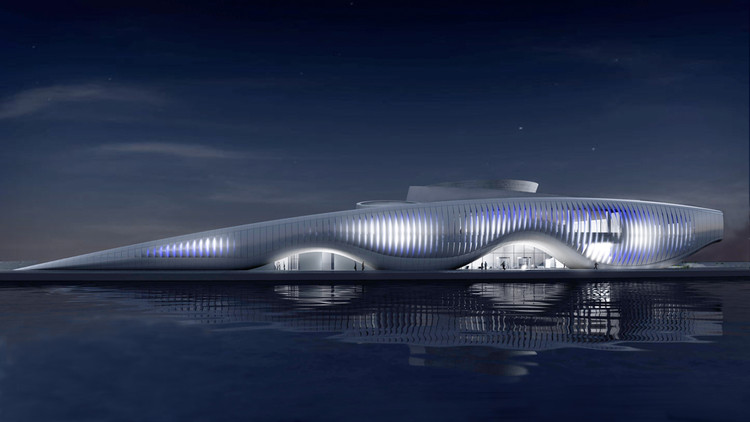 The site of the new pavilion is on a former industrial harbor.  As part of the exposition goals, the organization aspires to improve the water quality so that it may be adapted to use as an urban beach, offering leisure activities to the public.  The design concept of the building comes from the experience of the ocean: “as an endless surface and in an immersed perspective as depth” and informs the spatial and organizational concept of the building. The continuous surface changes its orientation from horizontal to vertical and defines the interior spaces within. The evolution of the surface creates horizontal levels that cover the foyer and become occupiable spaces within the Thematic Exhibition. The building has two edges, defined by its context. The soft edge meets the coastline and creates a new meandering edge. The opposite side that meets the land grows from the ground into an artificial roof-landscape that includes paths and gardens.

The Pavilion extends over Ocean Plaza, activating the street as the main entrance to the exhibit and create a shaded outdoor waiting area. The twisting surfaces of the cones define the open foyer and frame views of the ocean, while also defining niches for gathering points within the exhibition. The program is divided into three parts of a sequence: pre-show, main show and post show. The first of the procession is defined by two small cones with a ceiling height of six meters that visitors first step into; then moving into the main space they enter into a twenty meter high space of 1000 square meters. After the show, a more intimate post-show space leads into a cafe and swimming island in open water where the ocean is on view and visitors can relax. Upstairs, on the second level, a Best Practice Area will have a hall where insititutions will their research in fields like renewable energy and marine technology. Above, a roof top garden and landscape has an exhibition area where visitors get a full view of the Expo site. The plants in the roof garden will have local plants. A meandering ramp then takes visitors back down to the ground level while providing them with panoramic views.

The biomimetic approach of the kinetic facade further tries to link the building to its context. The facade has a total length of 140 meters and has a variable height between 3 and 13 meters. 108 kinetic lamellas make up the surface and supported at the top and bottom edges of the facade. The lamellas are composed of glass fibre reinforced polymers which gives them a high tensile strength, low bending stiffness and allows for large reversible elastic deformations. The kinetic facade was developed together with Knippers Helbig Engineers. The goal was to create a seamlessly integrated and continuous skin. A biomimetic approach was chosen to achieve the smooth movement desired.

The individual lamellas are moved by actuators on the upper and lower edges of the blade. Soma writes that the actuators:

… induce compression forces to create the complex elastic deformation. They reduce the distance between the two bearings and in this way induce a bending which results in a side rotation of the lamella. The actuator of the lamellas is a screw spindle driven by a servomotor. A computer controlled bus-system allows the synchronization of the actuators. Each lamella can be addressed individually within a specific logic of movement to show different choreographies and operation modes. Upper and lower motors often work with opposite power requirements (driving – braking). Therefore generated energy can be fed back into the local system to save energy.

The lamellas control lighting conditions with the space. The larger the blade, the more dramatic its affect on the space. The choreography of these elements animate the facade through the length of the whole building. The homogenous surface, punctured with views into and out of the building is the only “content” that is to be interpreted, saving all of the multimedia work for the interior space. The facade adds an “atmospheric movement” and creates a “mood” associated with the pavilion.

In order to reduce energy use the building is designed to be naturally ventilated. The interstitial spaces between the cones are oriented toward the prevailing wind direction. In the large exhibition spaces, air will be infused through the floor. The kinetic lamellas control solar input, and will be operated by solar panels located on the roof.