I am, admittedly, a big fan of UCLA. At least in the U.S., college loyalty begins and ends as an undergraduate and if you happen to receive your graduate degrees at the same school, well, the deal is sealed, as it were. But we’re not discussing the basketball team, here. We’re actually talking about academic programs and research.

And it just so happens that because UCLA is a research university, there is a lot of interesting research going on there. For example, at UCLA’s Department of Architecture and Urban Design, there is a program that was begun back in 2002. It’s goal? To help everyone improve the energy efficiency of their homes. For free. It’s called HEED, or Home Energy Efficient Design.

What is it? Basically, it’s a set of tools that help people re-design housing to be more energy efficient. That goes for both new and existing structures. And even better, while it was initially developed for California homeowners who were identified by their utility providers—the project began in 2005—the software was restructured to serve professionals in the building industry. That means it was re-made to serve architects, contractors, engineers, and of course, the homeowner to restructure efficiency for both new and existing structures.

This free, downloadable software incorporates many advanced features that allow both individual DIY-ers and professionals to share easily with each other because both can use the same free software without worrying about the prohibitive cost or licensing of expensive, specialty programs, and we all know which programs I’m talking about. It’s all been designed for easy access and use and since it is free, clients can explore different energy-efficient schemes on their own first. I can hear the protestations: “But clients don’t know what they’re doing!” While that is debatable, another way to look at this is that having both the client and professional sharing the same software will facilitate effective communication. And if anyone is near California, free workshops on the software. 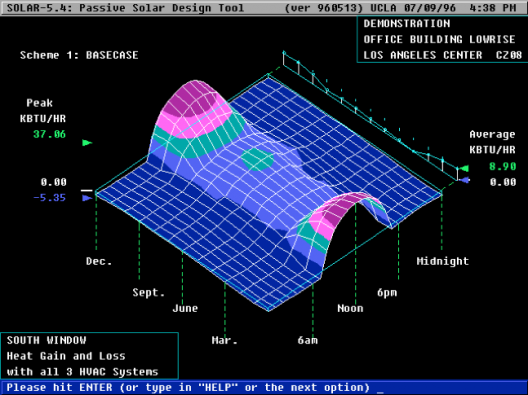 So what does this suite include? Well, there are tools to design a floorplan, standardized roof construction, walls, windows, window shading and even thermal mass based on one’s design. Even better, the software calculates the changes in utility rates as well as the carbon footprint of the design. Finally, all this individual information can be contextualized within global climate data. The additional Climate Consultant 5 provides further graphic data on temperature, humidity, and the impact of near and distant objects down to the day.

As I said in the beginning, I am an inordinate fan of UCLA, but this array of free tools does seem impressive, doesn’t it? After all, if it doesn’t turn out to be useful, it didn’t cost you anything except perhaps a little time, did it?