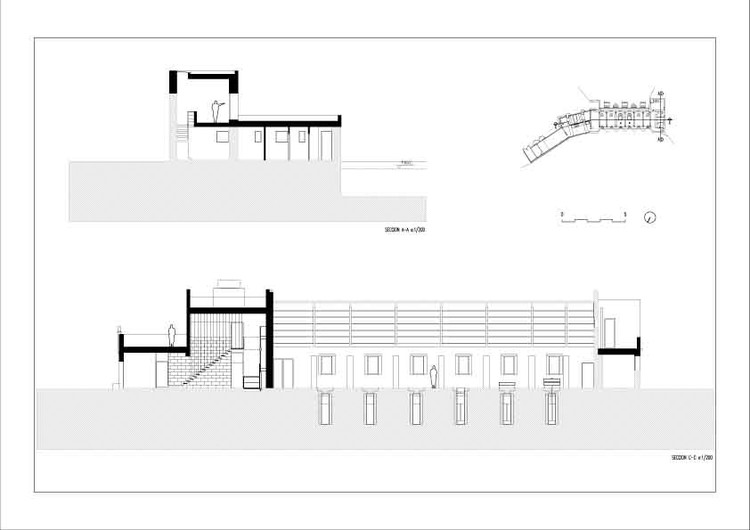 The first tidal mill we know of in Europe emerges in the south of France in 1125. In the middle of the fourteenth century there were around 50 mills on the coast from Ayamonte to Faro. In the eighteenth century we find about 10 mills operating at full capacity around Ayamonte, including the present one, built around 1750 by an Indiano named D. Manuel Rivero and nicknamed “El Pintado” (The Painted). Nowadays, five of them remain in that municipality.

After the Civil War, the shortage of grain is evident. This situation, coupled with the appearance of flour mills and the improvement of communications, changes the habits of the population that buys the bread and flour. By 1945, mills stop working after two centuries at full capacity. The great cover of the grinding room remained standing until it collapsed about 20 years ago.

THE OBJECT IN THE LANDSCAPE

The vision of the mill is always distant. Exempt, as an architectural object immersed in an almost lunar landscape, with a marked axiality providing it with appropriate proportions in order to highlight in such a vast and flat place.

It is situated with a parallel alignment to the access roads to the city: railway and road. A very clear alignment that becomes the main inner journey. A lateral approach, never centred, allows to cross part of the landscape having always in view the object. A path which must be preserved for its scenic beauty.

This building has a clear East-West directionality. The interior road runs through the old buildings. It is intended to foster this inner journey creating the group’s visiting turns.

The great room with its orientations and North-South views could be a metaphor for the “ayamontinian” duality between the land and the sea, between windmills and watermills, between Villa and Ribera. It’s the duality of its gable roof, two tides. It’s the journey that makes the sea through its bowels twice a day. From north to south at high tide, from south to north at low tide.

A tide mill is a very special device that leverages the gap caused by the flow of the tides, twice a day regularly and inexhaustibly, in order to move the stone slab over the tramp, grinding the grain introduced between them, through a hopper. In the area they coexisted with windmills, but contrary to these, their advantage was remarkable because they don’t depend on meteorological factors and permits to grind every day of the year, in addition to controlling the amount of ground grain depending on the existing demand.

The mechanism is simple. Sea water, through pipes and streams, crosses the access bridge, where the gates are, which are pushed by the force of the tide that rises and fills a reservation space which is called boiler. When the tidal flow reverses, the gates close with the ebb and the retained water can be used to grind just by waiting for the wood to descent and the small hydraulic jump takes place.

The miller can raise from one to six gates (in the case of this mill) letting the water pass through a narrow channel under the building which decreases its section, spinning a metal turbine called impeller, which, with the capstone or tramp, moves over the lower fixed one. Water, after passing under the building and moving the impeller, returns to the sea through the exit arcs, starting a new cycle.

DESCRIPTION OF THE CURRENT STATUS

It presents a ruined and neglected status of its structural elements. Every wooden-beam floor and roof has disappeared. Some supporting walls in the western area have cracks of considerable proportions and heavy crashes. The gaps, carved with stone and marsh brick, are in a deterioration process.

We must point out the quarrying work with “gaditanian” stone oyster type , in embankments, bases, tunnels, arches, nose tongs and corners, all in very good condition.

Nearby, we must highlight the millpond’s poor state and its way out to the marsh, both with little draft making it necessary to dredge. The paved outdoor areas have a certain value and keep in good conditions even though it’s incomplete, and the oyster rock dams are in good condition. The access bridge and the floodgates have been recently damaged.

The magnificent location of the building, close to town, yet in the midst of a declared Natural Park of the marshlands of Isla Cristina and Ayamonte, make the reuse of the Pintado Mill a unique opportunity to offer an edification support to this whole series of applications, all of them included in a single existing building with an undeniable scenic, ethnological, constructive and historical value.

The programme could be summarized as follows:

Recuperation of the working mill: as a reminder of a now extinct traditional industry which uses renewable energy (use of solar energy for lighting and washing facilities and tidal energy) with a display of tools and techniques related to the same subject.

Final stop on the Via Verde Gibraleon – Ayamonte tour: This is a display and practical explanation of everything previously stated for the visitors along with a small terraced bar to “recharge your batteries” before starting your return journey.

Cultural Display Centre: For the use of the region’s people there is a Conference room with visual equipment which can be used for overhead projection shows, receptions and various activities including seasonal art exhibitions.

What can be seen directly within the old ruins is the guideline for our work, which in general terms can be defined as a general cleaning and respect to the basic structures and works of the building, under which will be located uses that do not require to intervene with an excessive space between the dividing walls, without splitting excessively and maintaining the original dividing walls.

Furthermore, the location of the different activities and planned excursions for groups of visitors does not require any alteration of the mill’s original structure nor any substantial indoor renovation.

The programme’s development is structured around the configuration of different tracks without interferences between them and as rationally as possible. The tour group begins with a small reception area where the first panels and leaflets are presented, complemented by the projection of an audiovisual edition. Then we would enter in the permanent exhibition hall, about the natural environment of near surroundings.

The group would agree to consider the operation of the tide mill, watching the embankments and inlets of the north facade. The great grinding room, about 25 m. length, will house exhibitions about mills and the recovery of tidal passing waterways and two of the millstones. Finally, the group would come outside, via the South exterior walkway to see the departure of water through the six arches.

The intervention attempts to be characterized by its integration with the existing area through a discrete (not mimetic) dialogue. In this regard, the starting points were:

- Respect for the building’s general structure in terms of structural elements, trying to unify heights and to eliminate added parts.

- The recovery of the largest possible spatiality, removing interior walls and the quest for more light, opening up some holes in the exhibition areas.

- The intention of reflecting the contemporary parts with the use of new materials and the façade coating treatment, bringing out stony elements, using valuable materials that are extracted from the demolished areas.

From the proposal’s design we tend to form and material austerity, using economic materials, resistant and durable, easily replaceable and maintainable.

The use of photovoltaic solar energy for electricity supply and hot water production simplifies the centre’s future maintenance and uses renewable and clean energy, which makes this mill a prime example.

FINAL THOUGHT: LESSONS FROM THE PAST, CHALLENGES FOR THE FUTURE

The opportunity provided by the recovery of this tidal talent is immense in terms of its pedagogical potential, both the building and the place where it’s located, to be forcedly transmitted especially to younger generations, who need to know other ways of intervening in the natural environment other than those we usually see around, without depleting natural resources, but serving them without fleecing them. In order to emphasize this point, the intervention implements on the roof top, out of sight, solar panels for water heating and photovoltaic panels to generate electricity.

The rehabilitated building is completely modern, furiously contemporary with 250 years of life, because it provides a great intervention example in the natural environment and the long-sought integration between natural and cultural heritage. It has several lectures, including the following:

- Bridge-Building, as it rides from one side to the other of the estuary and demands to be crossed to get from one side to another. The water runs through its bowels twice a day, from North to South.

- Machine building, due to the fact that it converts tidal energy into kinetic energy in the interior in order to move the stones and grinding grain.

- Truly sustainable building- , as it takes advantage of a clean, inexhaustible and free source, without generating waste or noxious gases.

Summarizing, the long adventure lived by the “old” mill reaffirms what we already knew but every day gets harder to confirm: There is no better nature than the one which man has reached to negotiate.

This lucky and unusual agreement has occurred. The meeting agreed between man, land and sea.

The location of a hydraulic turbine in a waterway for electricity production, results in these issues, although, due to the small size of the hydraulic jump, we incorporate it for educational purposes only.