As we announced yesterday, Brooks + Scarpa Architects is one of the five finalists selected for the Kimball Art Center competition. Inspired by the “seemingly endless” blue skies and the unique blend of new and old within the historic Park City, Brooks + Scarpa delicately weave the heavy mass of the existing 12,000 square foot Kimball Art Center with the new 22,000 square foot addition that has been referred to as the Kimball “Cloud”. 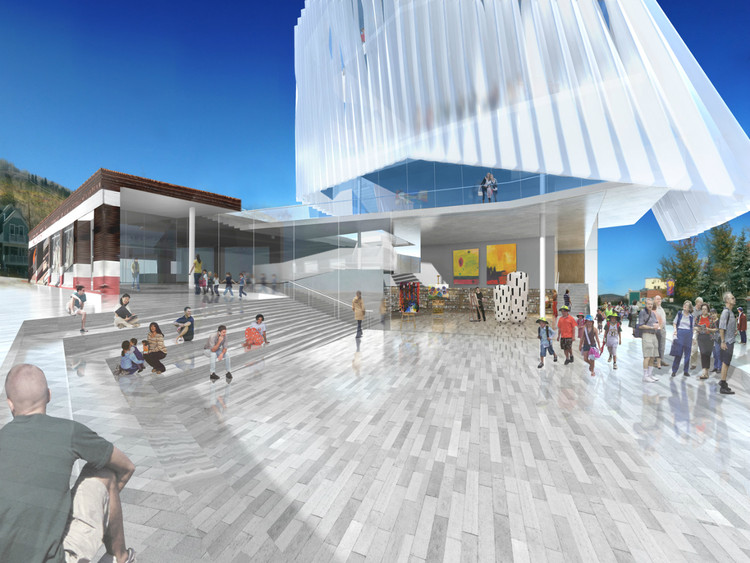 Capturing attention from a distance, the façade seeks to become a visual icon. The upper floors are composed of a conventional glazing system that is enclosed by a translucent honeycomb rain screen. The translucent faceted skin not only aides the buildings thermal performance, but transforms the Kimball Art Center into a glowing beacon within the streets of Park City.

Constructed of transparent glass, the ground level facade warmly welcomes visitors as it opens to the street. Spatially, the lower floor appears to be absorbed by the existing building and city, while the addition floats above, like a “cloud” levitating over the site as it is grounded by the existing structure. “All aspects of the building work in tandem and complement each other,” achieving a “collective strength” that would be unattainable on their own.

Consistent with the language of the exterior, the interior spaces knit together, offering a variety of spatial layouts that accommodate many types of activities. This type of flexibility allows the community to either view or participate in the artistic experience.

At the corner of Main Street and Heber Ave, a large exterior court links directly to the 20-foot high metalsmithing, welding and glass studios. The hardscape urban plaza creates a “negative entry point to the city” that contrasts the landscaped plaza across the street. This daily court will be used as an outdoor workspace for the artist studios. Large sliding panel doors opens the studios to the plaza, allowing artists to flow seamlessly from inside to out. Located midway between the existing Kimball ground floor and the basement levels, this court visually connecting most of the working studio spaces to the street. This configuration allows the existing basement to open up and connect to Main Street, joining the existing Kimball ground floor and new addition.

The proposal focuses on establishing strong connections with the Art Center and the public, expanding art into the broader community. As the working studio spaces are visually linked to the street corner, a passerby is not only directly connected to the art within the main exhibition space but they are exposed to the process in which art is made.