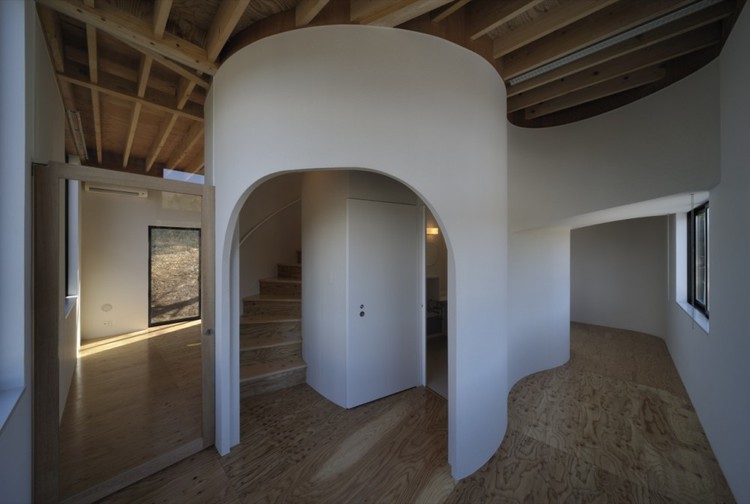 The site is located on a hillside approximately 1 hour by car from central Tokyo. Though there is a slope facing the north, it is prime property offering a magnificent view of the Western Tanzawa mountain range sitting in the distance. The owner is a family of three members with a husband who works as a car engineer, a wife who enjoys baking, and a high school son with a passion for bicycles. The husband requested a garage where he can enjoy his hobby customizing vintage motorcycles. The wife requested a kitchen where she can concentrate on serious cake baking. Both sought a life that exposed them to the changes of season and weather, a luxury unavailable inside a city.

Initially, we planned to build the home on the upper part of the slope in order to highlight the view while building the garage on the lower part of the slope near the road. However, this created a 6m level difference between the home and garage and still kept the garage more than 3m from the road. Ultimately, we decided to put convenience before view due to the heavy physical burden this would cast on its residents and placed the home near the garage at the bottom of the slope. However, even the “low” positioning on the slope still provided a fair view. The final plan placed the floor height at the highest possible position as permitted by law and the direction, size, and height of the opening was adjusted so as to provide the best view as possible. At the same time, we arranged so as to block the line of sight from the adjacent property.

The main feature of this home is in the mysterious white block that runs through the lower and upper floor in contrast to the simple box-looking façade of the building. After studying various plans, I started thinking that there should be a different way of designing the space other than using walls and building material to partition the interior between travel space (hallways and stairs) and purpose space (e.g. living room, dining room, bedrooms.) The one curved wall was my answer. I realized that by controlling the positioning and curvature of this one curving wall placed inside the space, it could cleverly store all the functions sought in this small 3-family household.

The positions and curvatures of the curving wall were determined by the openings on the exterior wall and the distribution of furniture. Additionally, stairs, storage space, bath, washroom, and other spaces were hidden inside the walls. This curving wall can be considered a structure that also functions as stairs and the core of the facility but it is also a buffer that gently divides paths from private rooms, a screen that absorbs the light flowing in from the window, a rectifier that controls the flow of air passing through to the upper floor from the lower, and it is also a big piece of furniture.

In contrast to the extremely simple exterior, the interior contains complex and diverse functions. The round space born between this simple exterior wall and complex central object is the area that reflects the complex and diverse changes in light and wind brought about by season, time of day, and weather. And this space is also the stage where a family spends their daily life.