French architects Emmanuel Combarel Dominique Marrec sent us the transformation of this small apartment, with a clear strategy: Decompartmentalise the place so as to fit out an open plan and elude the demand of an extra room by conceiving in the center of the volume a suspended white cube which generates comic and disconcerting use situations. 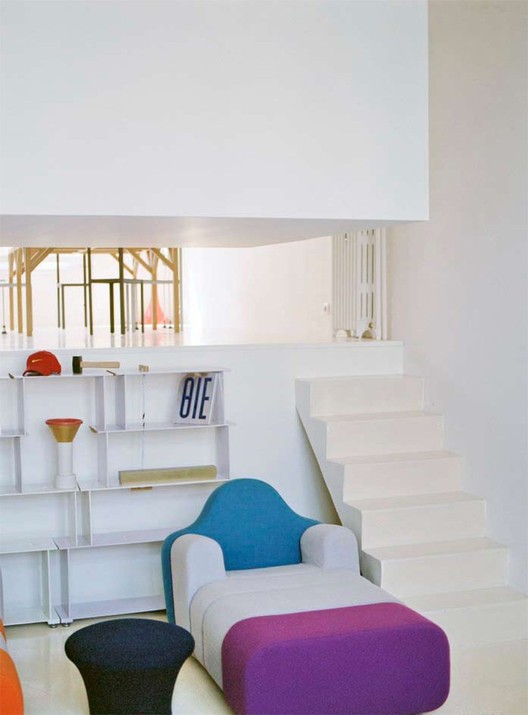 This former artist studio caracterised by a difference in height which shares the volume from a simple to a fake double height (3.70 m under ceiling in the main room) had been originally marqued by a awkward mezzanine under which one couldn’t be up and had, to get on it, to pass through a small doorway managed into a separating wall existing between the 2 volumes.

First step the plan is freed from all occurrences. The matter is to work on a 50 sqm apartment in which the variety of orientations, volumes make possible unusual, uncommon living situations.

The restraint of the demand of the client to fit out an independant bedroom has been turned into an advantage by putting this intermediary room in a central position, straddling the two floor levels, disconected from the floor. The bedroom becomes an islet in the heart of the appartment around which you can turn, experimenting different moods : up / down, below / above, on / under and revealing unseemly uses.

The bedroom, connoted as the archetype of privacy, intimacy, becomes an object of curiosity by transgressing his symbolic value, appearing like an anomaly. Open and visible from the entry, it stands for a huge inhabited furniture. Facing the dining room, it can be used as a “bumrest” or a bench.

Suspended right in the center of the apartment, leaving untouched the floor and the circulations around, it divides the space, reversing the perception of the atmosphere in the apartment by making private what is usually not : the living room.

Wherever you stand below or above, it truncates the perception of the occupiers bodies of whom one only sees the legs sitting, crossing or  walking around in the place.

The suspended bos is made of a metallic structure (section 40 x 40 mm) covered with wooden panels. The cube – as well as the floor, the walls and the ceiling, has been painted with a white polyurethane resin.