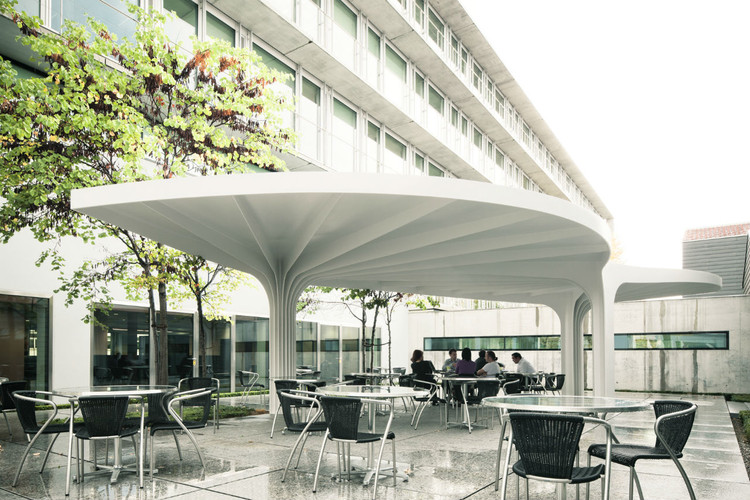 At its offices in Adliswil (Soodring 6), just south of Zurich, SwissRe wanted to erect a suitable outdoor shelter in the interior courtyard. As we had been the architects of this complex, which opened in 2001, we were keen to retain the me- diating function of the courtyard between the main building and the annexe, and thereby keep the clarity of the urban design concept behind this development. The resulting proposal, which was accepted and implemented, was for a steel roof with an organic shape resembling a leaf and contrasting with the rigour of the geometry and materials of the courtyard.

The shape of the roof emerged from the parameters at the location itself and the requirements as regards use. At the north-eastern edge one tip of the leaf shape borders on the cafeteria annexe but without touching it. People coming out of the cafeteria through the door at this point take one step in the open air before reaching the shelter of the canopy. From there the generously curving shape of the roof stretches part way down the length of the courtyard. So as not to re- strict natural light entering the cafeteria, there is a wave-shaped indentation on the north-east side of the roof, and it is this that led the way to the characteristic overall shape. The three supporting columns are all located at the perimeter of the canopy, thus giving flexibility in the placement of tables and seating below it. This arrangement also enables the rib encircling the perimeter of the canopy to become an integral part of the overall load-bearing structure.

The position of the slim, fan columns follows the form and segmentation of the roof, which together with the edge of the canopy and the ribs forms the supporting structure. 3D CAD models were generated to optimise the steelwork in terms of weight, design and connections; this also facilitated the job of understanding the complex configuration in particular of the edge of the roof and determining the specifications for cutting and rolling. Fitting the components together was a demanding task, involving complex steel and metalworking skills. Trials with 1:1 scale components allowed us to control and optimise the connections and the overall visual impression. When it came to erecting the structure, we were faced with logistical challenges as regards delivery and assembly. Special vehicle scheduling, Saturday work and the biggest crane possible (components had to be hoisted over the five-storey office building) all featured in the plan for efficiently and successfully installing the two-part construction in the courtyard.

Chairs and tables are set out freely across the whole courtyard area, the new roof being incorporated quite naturally in this context. Anyone sitting under this shelter is aware of the regulating power of the ribs which are at once supporting columns and roof girders. The rhythm and geometry of the web plates points out the structural logic of the design, mapping out the force flows in the sometimes widely cantilevered sections. Yet together the structural frame and the space it encloses present a single, indivisible unit.

While from underneath the canopy there is an air of order and calm, from out- side it is the dynamics and the contours which impress. That is due in particular to the outer line of the roof which constantly changes in curvature and height around the perimeter. This perimeter itself is formed by one of the ribs, snaking around the convex and concave column edges and leading down into the bea- ring points.

As seen from the offices above the courtyard, the top of the canopy is simple and understated. The leaf shape is marked out in the fine lines of the ribs, bet- ween which a little water sometimes collects in the depressions after rain, just like in nature. The simple white coloration emphasises the graphic quality of the structure and contributes to good daylighting in the adjacent rooms.

The staff at SwissRe in Adliswil were quick to take possession of this new facility, and welcomed the shelter it provided outside. A small project, but one which embodied a whole array of the kind of challenges faced in our profession, this organically shaped feature in the courtyard enhances the existing complex while also making its own architectural mark. 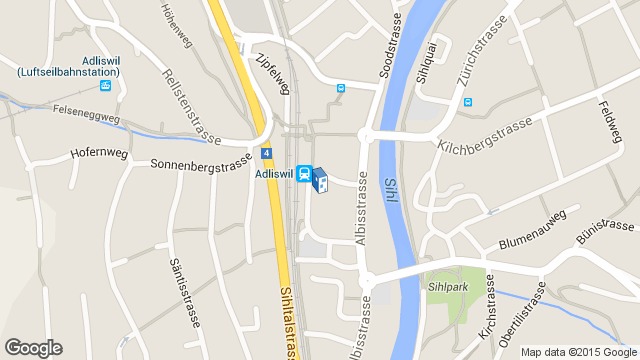