Save
Sneek Bridge / Achterbosch Architectuur with Onix
Share
Or
Copy 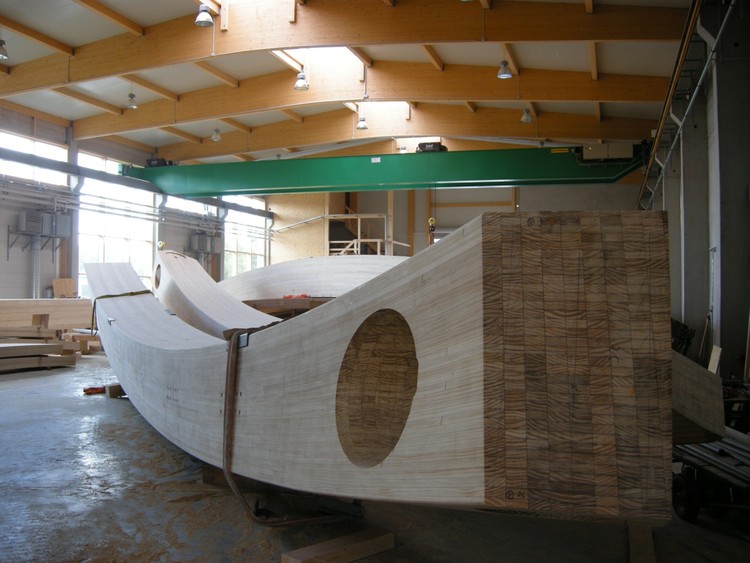 The city of Sneek in the Province of Friesland, Netherlands has a rich maritime legacy—and the Province required a landmark entrance that represented this legacy. A design competition commenced, and Hans Achterbosch’s design featuring exposed wood beams and representing an upturned fishing boat won. High-technology Accoya wood was the material of choice due to its inherent lack of CO2 emissions per year (including a more than 50% improvement of CO2 output compared to concrete), an important detail for the environmentally conscious Dutch.

All bridges built in the Netherlands must have a minimum 80-year lifespan. Sneek commissioned a design team to set a testing and qualification program for Accoya that was specific to the design project. The expected life of a steel bridge was 55 years, pre-stressed concrete was 90 years and tropical Azobe hardwood was 45 years. Tests concluded that Accoya wood’s durability, with more than 80 years in the bridge application, made it the ideal material for use in the bridge.

Approximately 1,200 cubic meters of Accoya wood was used in the production of the 1,134-meter-long Sneek Bridge, which includes two traffic lanes and a bicycle/walking lane crossing the A7 motorway. From the side, the heavy-traffic bridge offers the form of a triangular overhead truss; crossing diagonals create a framework-like filling. The supporting beams are 1 meter x 1.4 meters thick, made by finger jointing and laminating. The bridge was primarily manufactured off site, then lifted into place for final construction.

Accoya wood undergoes a nontoxic proprietary modification process called acetylation that renders it an unrecognizable wood source, preventing fungal decay while increasing its dimensional stability. The material is sourced from FSC- and PEFC-certified forests and is Cradle to Cradle Gold certified.