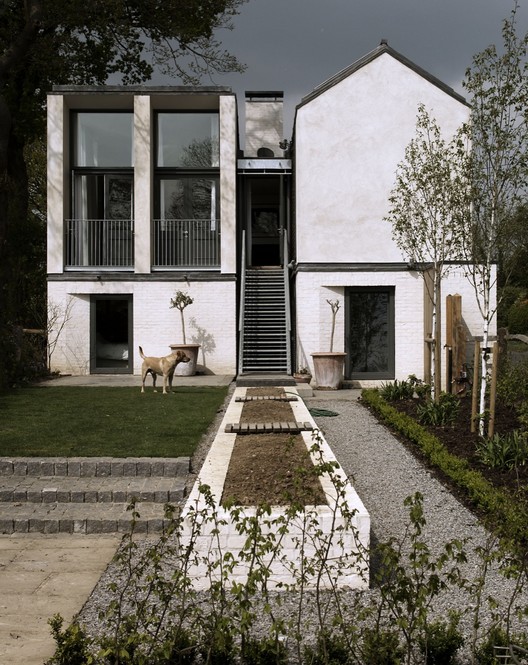 Text description provided by the architects. The site for this house is at a prominent bend in the road, where an old drover’s track meets a large oak tree marking the boundary of this small rural village. The existing building was an introverted former Baptist’s chapel suffering from subsidence. We realised that in replacing it we must design a house that took full advantage of the site’s long views across farmland to the west, whilst doing justice to its position and registering the memory of the chapel – still remembered with fondness by the villagers.

The building’s unusual composition resulted from a considered response to its local and historic context. In plan, the building is broken down into two slim, offset blocks, in keeping with the scale of the neighbouring cottage. The block facing the road has an apsidal form; a ‘memory’ of the demolished chapel, and shields the set-back rear block from view. This approach creates a dramatic skyline with the house’s tall brick chimney appearing to float between the two distinct halves of the house. The two storeys of the house are distinguished on the outside by the white brick plinth of the ground floor, and the pale render and tile hung walls of the upper floor, echoing local vernacular construction. This distinction between the floors is carried through internally with the expansive living space of the first floor contrasting with the private sleeping quarters of the ground floor. The ground floor is dense with detail and materials, including oak, black stone and a white brick vault. The complex plan adds to the intrigue, creating a comfortable and private series of spaces that feel as if they are carved from the weighty brick plinth. The cave-like atmosphere heightens the contrast with the light, airy living space of the piano nobile above. This lofty space fills the entire volume of the first floor, under an undulating roofscape, and enjoys spectacular views across the countryside through 4m high windows, set between a series of columns. A low central section creates an intimate area around an open fireplace, with two free-standing walnut cabinets defining the kitchen and study areas.

The house and garden were designed as a single entity, carefully integrating the project into its site. A long brick-edged strip of planting extends from the house continuing along the central axis. This is planted with lavender, which follows the underground routes of the rainwater harvesting and heat pump: a visual indicator of the sustainable technologies that have been integral to the design. This house engages with its wider landscape and fully utilises its unique setting, giving the clients a dramatic and comfortable home and continuing the variety, scale and material richness of the village.

Client’s Brief: The clients’ converted former Baptist chapel in Plaistow, a small rural village in West Sussex, had ceased to be viable due to subsidence. They decided to demolish it and build a new, two storey, 3 bedroom house on the site, which would be sustainable, take better advantage of the site, incorporate an office, and allow them to entertain up to 10 dinner guests.

Planning Constraints: Plaistow is a rural village with a Conservation Area at its heart. The Sussex vernacular predominates. The new house occupies a prominent position at one of the entrances to the village. The tight site has a road bordering its eastern side; to the west are open fields. Chichester District Council engaged in a constructive dialogue with the architects, culminating in the proposals being approved by the planning committee.

Materials: Externally, the house makes use of a white brick for the ground floor, and for the first floor a mixture of self-coloured render (made using recycled glass), and tile hanging, re-using the roof tiles from the demolished building. It has a lead roof. Windows and doors are timber, external railings are galvanised steel, and paving consists of granite sets and blue-black limestone. Internally the ground floor has stone floors and walls, oak panelling and a vaulted ceiling lined with white brick. The first floor is predominantly white-painted plastered masonry, with oak floors and walnut built-in furniture.

Method of Construction: To counter any further subsidence the house is built off a piled deck, and uses masonry cavity wall construction. A beam and block floor spans the first floor, with an in-situ slab tying together the two halves of the building. The roof is steel and timber-framed.

Sustainability: The house uses a ground-source heat-pump for heating and cooling; recycles rainwater; and is designed using passive solar techniques to make use of thermal mass, with south-facing windows set in deep reveals to limit solar gain in summer and increase it in winter. 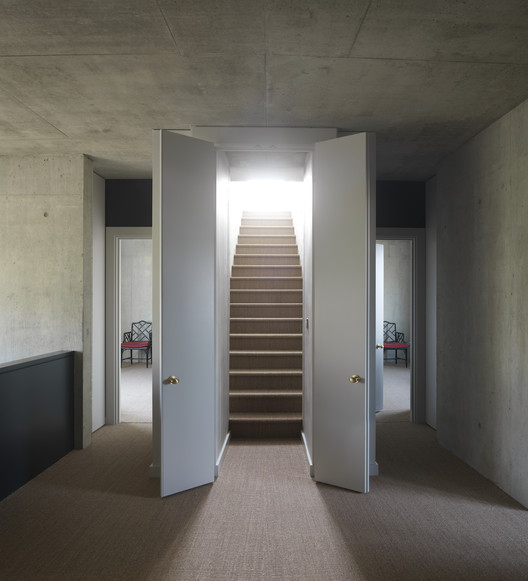