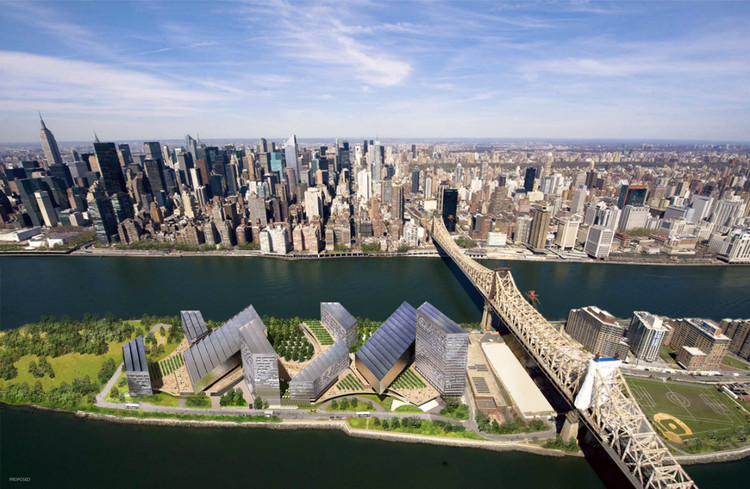 The LEED Platinum core educational building will be the home for Cornell and Technion, Israel Institute of Technology partnership. The high performance building envelope maximizes daylight, employs demand-controlled ventilation, and will be built with recycled material. All other campus buildings must achieve a LEED Silver minimum and will house residences for faculty, staff and graduate students, a public atria and corporate space.

The campus’s solar array will be three times larger than the biggest current solar array in New York City, generating 1.8 megawatts at daily peak. The four-acre geothermal field is composed of 400 wells that will use the Earths internal, thermal power in order to provide the necessary heating and cooling for the campus. Electrical power will also be produced from a fuel cell, further relieving dependence from the grid.

The Tech Campus will include elements to treat storm water and create community gardens. “Green” landscape concepts include rain gardens and bioswales, green walls and roofs, and reforestation that will create a new, small urban forest. The 500,000 square-feet of proposed green space aspires to become one of New York City’s largest public green space, sharing stellar campus views of Manhattan and Queens waterfronts.

The initial phase of the proposed campus will require a quarter of the electricity from the grid, emit half of the greenhouse gas, and require less than half the fossil fuel to power, heat and cool than a comparable conventional campus that meets current energy codes.

Going green is nothing new for Cornell. The university has reduced its campus greenhouse gas emissions by 25 percent and continues to follow their award-winning 2009 Climate Action Plan in order to become carbon neutral by 2050. Milstein Hall at Cornell University by OMA illustrates the universities continued ability to re-invent itself and serve as a leader in innovation.