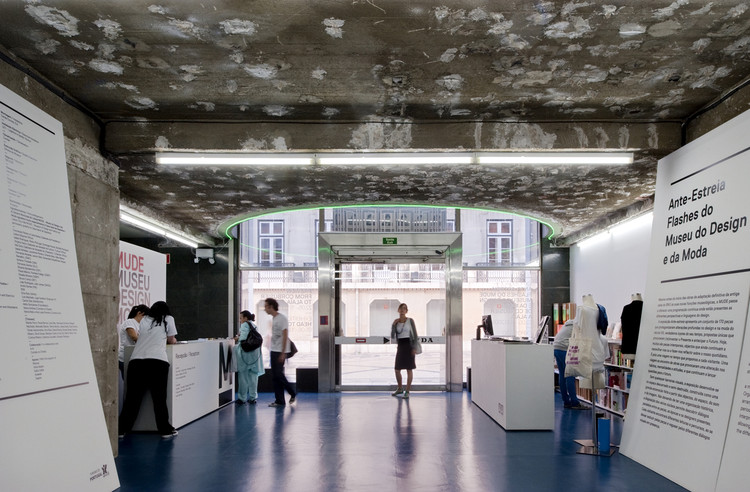 The project for the Design and Fashion Museum provisional premises provides an intervention in the old Banco Nacional Ultramarino building on Rua Augusta, situated at the heart of Lisbon’s historic city center.

The building was designed by the architect Cristino da Silva (initiated in 1952) and was characterised by a ground floor, entirely dedicated to client service with a strong urban relationship to the streets surrounding the building and, most importantly, an atmosphere distinguished by the solid nature of the materials used and the sophistication of the construction undertaken. This was the most Viennese of Lisbon banks, with a stone counter capable of defining the design of the entire space in itself and an interrupted interior that reveals the proportions of the building block from the inside.

At the beginning of this decade, the bank changed hands and was adulterated via a series of structural works that were halted to preserve the heritage that the building represented. Since then, the building has been without its original fittings and the concrete structure is visible. In 2009, Lisbon City Council acquired the building to house the Design and Fashion Museum. The project that we designed is for the museum’s provisional premises, with an area to display the collection, space for temporary exhibitions, a bookshop and café and also an area for cultural events with capacity for one hundred people.

The architectural proposal is based on our first reading of the ground floor. This is the only building in the Baixa Pombalina area (the 18th-century city centre planned by the Marquis of Pombal after the earthquake of 1755) where one can have a full perception of the configuration of the whole building block from the inside as well as an interrupted view of the streets around it. We departed from this unique characteristic and proposed a new programme without building any walls and with limited demolition work, in order to clarify the perception of the space.

The intervention in MUDE is primarily made with LIGHT. The non-material element of light is used to draw attention to the exposed concrete and most importantly to the collection, with artificial lighting wrapping around some of the building elements. The project is further characterised by the expressionist presence of the exposed concrete structure and by the industrial materials that were used – SCAFFOLDING CANVAS, that allude to the street and PALLETS, that were used to display. The floor was partially painted with REFLECTIVE PAINT. The design and fashion items occupy the space in an informal way, establishing a close relationship with the visitor.

From the cafeteria, with its single long cork table, one looks out to the museum through a single glass sheet as well as to the surrounding streets of the Baixa Pombalina.