The project is the result of a competition won in 2001 for a new theater in the city center of Fribourg. The project will be completed at the end of 2011 and its auditorium is going to provide 700 seats for spectators. 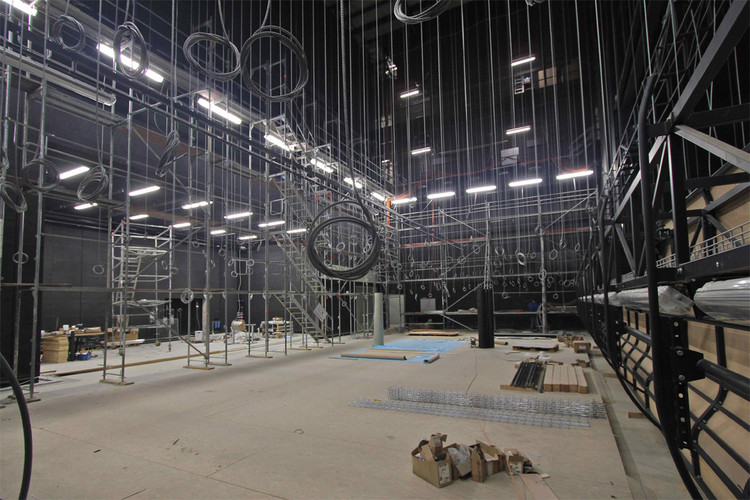 The form of the building emerged for two reasons: first because of the spatial restriction through an already existing cinema complex below ground where the new building had to be constructed on top and secondly from the effort to leave as much as possible unobstructed space on the ground floor by creating two big and attractive open public spaces at the same time. This is achieved by reducing the footprint of the building to a minimum with two big building sections cantilevering from the central stage tower; the cantilever towards the city mainly contains the rehearsal rooms and administrative offices, the other one is facing the park and the incision of the river flowing through the city and features the auditorium with a slightly slanted underside above the public space. The ground floor is only occupied with the foyer and the stage tower above it.

The building has large openings on its narrow sides towards the city and the park and almost no windows on its longitudinal facades. At ground level, the foyer opens on both sides to the squares. The rehearsal rooms and the bar which is situated underneath the auditorium and which allows generous views onto alpine mountains, are faced with large windows stretching over the whole width of the building.

The structural composition of the building matches the uniqueness of its overall form. The building is held up by a large portal frame on its cross section which is made of a structural mixture of reinforced concrete and steel. On both longitudinal sides of the building, the public is guided upwards to the auditorium on stairs which are inserted within the depth of the structural frame on each side.

The strong and generous form of the new theater in combination with its public function are not only a landmark for the city but also for the entire region, both in terms of its architecture and its cultural importance.