Richard Meier & Partners have released their final design submission for the new Royal Alberta Museum in Canada. Considered as one of the four finalists the firm, although not chosen as the winning entry, proposed “a timeless work of architecture that would engage the ongoing discourse of civility and urban place making while establishing a forward-looking museum destination and technologically advanced educational facility. While we are disappointed we won’t be working in Edmont this year, we are continuing to expand or work overseas. We thank the jury for their consideration,” commented design partner-in-charge Bernhard Karpf. 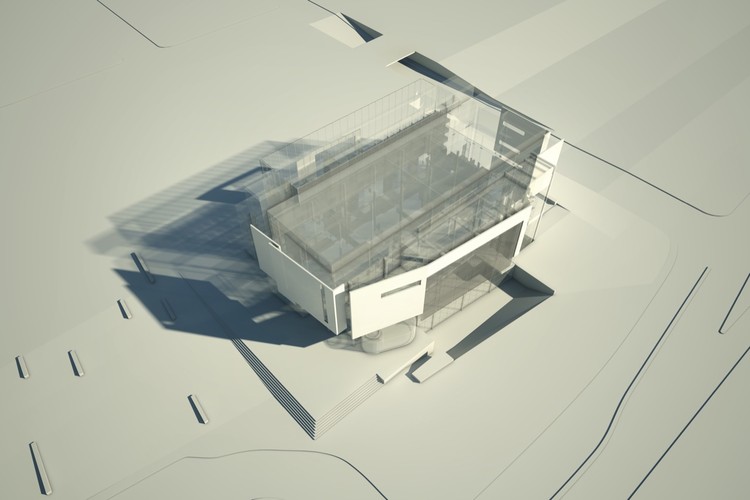 New York, September 15, 2011 – Richard Meier & Partners was one of four architectural firms considered for the new museum in Canada. Although not selected, the firm is proud of its design which meets all the requirements established by the Government of Alberta. Under the Richard Meier & Partners plan, the site was envisioned to become a remarkable museum and authentic cultural center for the residents of Edmonton and its visitors.

The Museum was conceived as a series of functional bands running east-west with administrative functions to the north, a continuous service spine in the middle, and the large exhibition areas to the south surrounded and enclosed by the unifying atrium and ramps connecting all floors. The upper exhibition floors form an enclosed box with open floors to flexibly accommodate the layout of exhibition spaces while on the lower floors smaller and more articulate “events” such as the Manitou Stone Gallery and the Auditorium/Theatre offered a dialog with the public spaces both inside, the Atrium, and outside – the Plaza, the Park, the Street.

The image of the Museum was going to be expressive of its functional components. Its lightness and transparency and its white color is in this case fittingly analogous to freshly fallen snow, respecting the fact that Edmonton is, indeed, a winter city. The new building was going to be an open and inviting place for visitors. Its massing responds both to surrounding, large scale structures as well to the more intimate scale of the urban street level. The main plaza to the west of the museum was intended to act as an urban crossroads and the city’s “living room.” The final design submission proposed a space for large community gatherings, such as simulcast hockey games on the projection wall on the museum’s west façade facing the plaza, sponsored film nights, and similar social events.