Save
Zaha Hadid: Form in Motion Exhibit at the Philadelphia Museum of Art
Share
Or
Copy

Zaha Hadid: Form in Motion now exhibited at the Philadelphia Museum of Art through March 25th, highlights the architects product design within a unique atmosphere. Creating for the first time in the states her own setting for an exhibit, the first female Pritzker Prize winning architect developed an ‘undulating structure of finished polystyrene with vinyl graphics’ to display furniture, footwear, and her Z-Car I.

“Hadid envisions the gallery as an active element in the display of her own designs, and will create an immersive three-dimensional environment,” said Kathryn Bloom Hiesinger, Curator of European Decorative Arts after 1700. “She is interested in the interface between architecture, landscape, and geology, and explores the intersection of these elements with a spatial composition that ebbs and flows in wave-like movements, manipulating the viewer’s understanding of space with constantly shifting perspectives.” 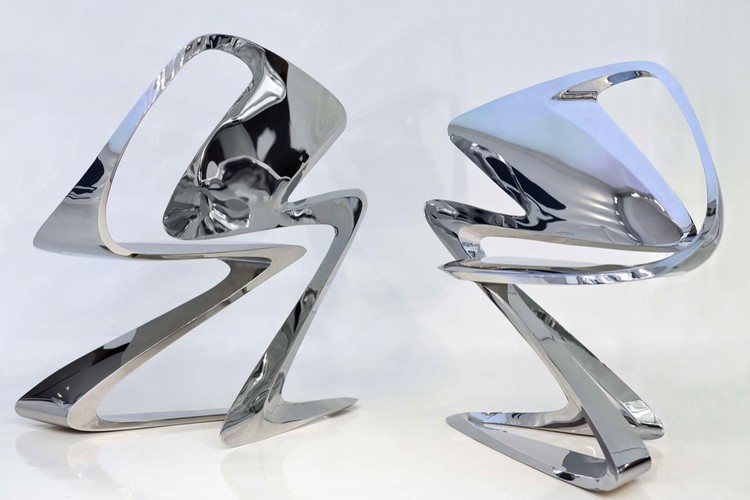 Philadelphia – Zaha Hadid, one of the most innovative architects of the twenty-first century and the first woman to receive the renowned Pritzker Architecture Prize in 2004, has advanced the language of contemporary architecture and design, exploring complex fluid geometries and using cutting-edge digital design and fabrication technologies. For Zaha Hadid: Form in Motion

“As an architect, Zaha Hadid has challenged many perceived ideas in the field of architecture and design, exploring and exploiting new technologies in the service of creating a new language of space and structure,” said Timothy Rub, The George D. Widener Director and Chief Executive Officer of the Philadelphia Museum of Art. “We are delighted that she has created for us an installation design that provides a dynamic setting for the presentation of her recent designs and will both challenge and delight our visitors.”

Combining architecture and design, Zaha Hadid: Form in Motion will display an environment of an undulating structure of finished polystyrene with vinyl graphics based on curvilinear geometries. Exploiting a formal language of fluid movement, Hadid’s exhibition design emphasizes the continuous nature of her work, and how the fields of architecture, urbanism, and design are closely interrelated in her practice.

Sleekly curving sofas, tables, and chairs made of materials ranging from steel and aluminum to polyurethane will inhabit the gallery, while jewelry, shoes, and tableware installed together in small groups along a rippling wall represent the wide variety of new and unusual shapes Hadid has introduced into the language of design. The Mesa Table is supported by branching, lofted connectors, more void than solid, while a table made of polished aluminum appears to hover close to the floor supported only by the same invisible forces that generate the craters on its surface. The striated video wall, sinuous floor and wall graphics will transform the gallery and its contents into a singular, fluid, dynamic composition.

Some works are disguised as micro-architecture, such as the Coffee & Tea Set (1997), nearly unidentifiable as a set of containers for tea, coffee, milk, and sugar. Others, including WMF Flatware and Crevasse Vases, are more transparent in function. Among the highlights are a collection of Swarovski crystal-encrusted necklaces and bracelets, and spiraling, strappy shoes made for Lacoste and Melissa. Hadid’s three-wheeled Z-Car I, an aerodynamic prototype mimicking several of Hadid’s sculptural forms, will be on view in the Perelman Atrium.

Collab, a volunteer committee of design professionals will honor Zaha Hadid on November 19 with the Design Excellence Award.