Save
Batman's rumored new home for The Dark Knight Rises : Welcome to the Batcave (maybe)!
Share
Or
Copy

Batman’s rumored new home in the upcoming The Dark Knight Rises is none other than the long awaited arrival of the batcave. Located in Turda Romania, the abandoned Turda Salt Mine is flooding the internet with buzz that this will be the location where filming will take place for the batcave. Leaving fanboy’s everywhere lusting for more information that this is in fact where batman will store his batsuit, batmobile, and all of his other gadgets. While filming for The Dark Knight Rises has already begun, it is with high hopes that the Turda Salt Mine will be added to the filming locations and serve as batmans’s new home. 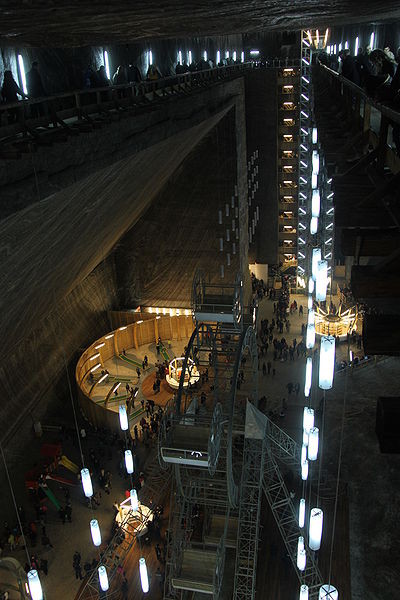 Originally salt was first extracted here during antiquity and the mine continuously produced table salt from the Middle Ages (the mine being first mentioned in 1075) to the early 20th century (1932). Since 1992, Salina Turda has been a halotherapy center and a popular tourist attraction. Inside the salt mine the temperature remains constant (10-12 °C) all the time, at any time of the year. Humidity in the air remains constant, too, at about 75-80%.

The Salt Mine is mentioned in official documents from the middle of the 13th century, when the mine was offered to the Transylvanian Catholic Church leaders. In the Middle Ages, Turda was one of the biggest places of salt extraction in entire region. The salt was extracted as clods which were then cut by specialist workers. The mines were lit by candles and tallow rush lights; explosives were never used for exploitation nor mechanical equipment used for cutting the salt.

All facts and information aside, this just looks plain cool and very deserving for the new home of the caped crusader. Hopefully all rumors turnout to be true.