We propose a station that pretends to be a real terminus station. Consequently, it is not a place just to pass through, but a place where the passengers change their rate of movement. In this place, the city of Huelva introduces itself to the traveller, and sees him off. For this reason we have not proposed a simple halt where we get off a train which continues its journey, but rather a Terminal Station that has to be the end and the start of all travel. 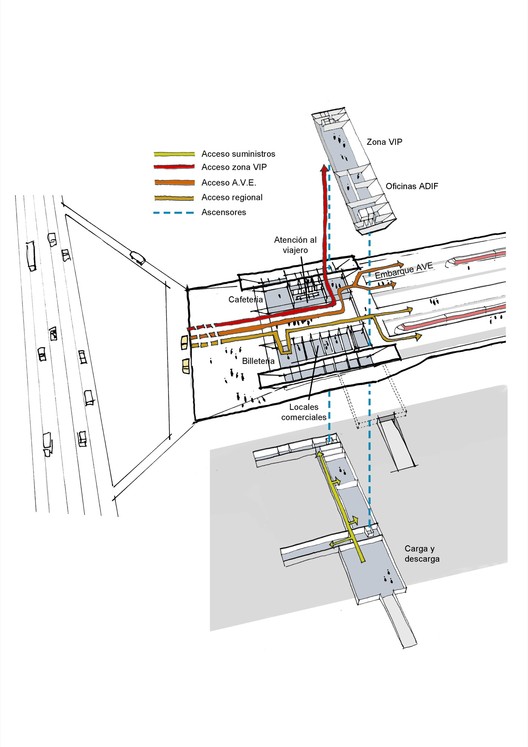 We therefore propose, with all its consequences, a new urban development in a unique place that contributes to the creation of an urban growth of high quality in the city of Huelva.

Maybe the Latin locution “Tabula Rasa” better summarizes the dual concept of our project. On the one hand, the first meaning is synonymous for oversight and at the same time for a beginning. This gestural action frees us of old prejudices, allowing us to be begin the drawing of a new concept or the narration of a new time.

Overwhelmed by so many superfluous and the excessive architectures made of arrogant arches with extravagant curves and with so much semeiotic of the power attributes, we proposed an elementary architectural gesture, a plane, a ceiling, a board. It is a “Tabula Rasa”.

It is a simple plane, a democratic ceiling for receiving, protecting and giving shade. It is an architrave Architecture of straight lines that is situated on marshland soils with the solid ground is at a depth of 35 m and with the logic foundational technique of using the minimum number of possible supports.

Four pillars support a board, a perforated cover that transforms the shadow in half-light, and qualifies it as a shady place. We call the front “triumphal arch”, which is like an expression of the success. We propose that the open door communicate welcome. It is the entrance and the exit door from which we recognize all the terminal stations.