The Busan Opera House proposal, by WEAVA Architects, takes full advantage of its placement within the Marine Culture District; a site advantageous for designating the building as a unique cultural landmark. Their concept embraces both the city and natural landscape by providing two distinct, yet connected faces. More images and architects’ description after the break.

With the development of North Port also comes the exaltation of the city of Busan. A resonating voice glorifies the city and its inhabitants, and the strength in the capacity of this voice to evoke thought, inspiration and emotion increases with each successive stage of development. The voice carries forward throughout the world, ushering the city of Busan into a new cultural era while recognizing the history of the people who identify with it. From the mountains embracing the city, an echo resounds across the community and recalls the beacon mounds, which have been traditionally used as a method of communication beyond large distances and are currently celebrated for awe inspiring beauty. In North Port, the mountain’s echo joins the voice of exaltation in the design of the Busan Opera House, forming a harmonious relationship composing the new cultural voice of the city.

Ever present in the distance, the distinct form of Mt. Gubong is projected onto North Port’s Marine Culture District. This natural topography is transformed to fit the urban context of Busan by using the topographic lines of the mountain to develop a series of horizontal bands modeled in the fashion of plateaus. Further transformation occurs by twisting these bands to create strategic programmatic openings within the mass. The resultant form echoes the image of Mt. Gubong while contributing to the development of the burgeoning international city.

The “city face,” or north elevation, echoes the rigidity of the urban environment through a hardscape plaza and angular entrance stair. The “sea face,” or south elevation, echoes the fluidity of the sea through the use of more organic topography and green space. The varying degrees of architecture and landscape create a gradient effectively linking the opera house to both the urban and natural environments present in Busan.

A bridge dedicated to vehicular traffic is located to the north of the building. Visitors arriving by taxi or hired car enter a roundabout and alight adjacent to the Marine Culture Plaza. Limited car parking is provided for disabled patrons adjacent to the nearest public entrance. Vehicles arriving for the delivery of stage sets, props and various goods and supplies access the loading dock through a service road separate from the main entrance. Trucks, trailers or coaches that need to remain on site are provided parking adjacent to the loading dock near both staff and public entrances. A pedestrian path is also provided within this first bridge, leading patrons into the Marine Culture Plaza, central to all development of the District.

A second bridge to the south of the Opera House is restricted to pedestrian access, providing a link from the Forest of Sea Park to the Marine Culture waterfront. Upon crossing this bridge visitors are afforded the opportunity to traverse the boardwalk, relax in the Waterfront Plaza, peruse retail shops, attend a performance at the outdoor theater, and access the Opera House.

The multifaceted program of the Busan Opera House will result in a variety of activity at the site throughout the day. Heightened activity in different locations will occur at times particular to specific programs. Activity begins in early morning with the arrival of administrative staff, delivery of stage sets and supplies, and local residents strolling along the waterfront. Outdoor and indoor public spaces such as the plazas, shopping area, exhibition spaces and restaurant will receive the majority of its use at midday and again in the early evening. Rehearsal spaces, company studios and production areas will be most active during the afternoon as performers, producers and technicians prepare for the evening performances. Increased activity will occur in the main lobby, box office and plazas in the evening hours before a performance as the audience arrives. During performances the theater and opera auditoriums and backstage areas will be the most active and at intermission the reception spaces and lobby areas will see maximum activity. 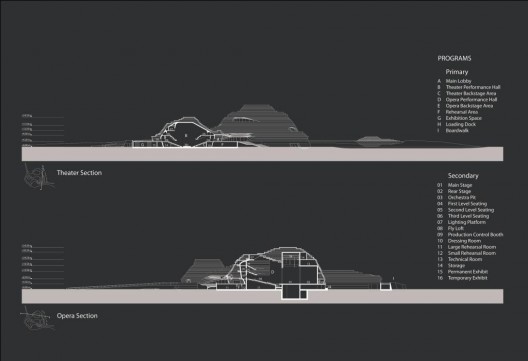 The podium houses the majority of programs that support the performance halls – administrative and resident company offices, studios and workshops; loading dock, stage set assembly and storage; rehearsal spaces and dressing rooms. The remainder of support spaces such as additional dressing rooms and technical rooms are located surrounding the stage and fly loft at different levels. 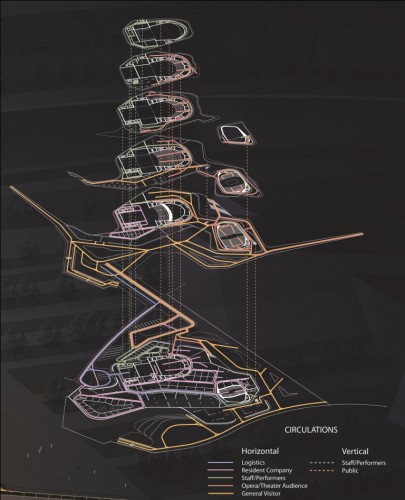 A variety of reception areas, bars, restaurants and lounges are located on each level, straddling the line between public and private areas. They are adjacent to auditorium seating and public restrooms for ease of access from the performance halls, yet are also located near staff circulation for the necessary distribution and storage of goods. 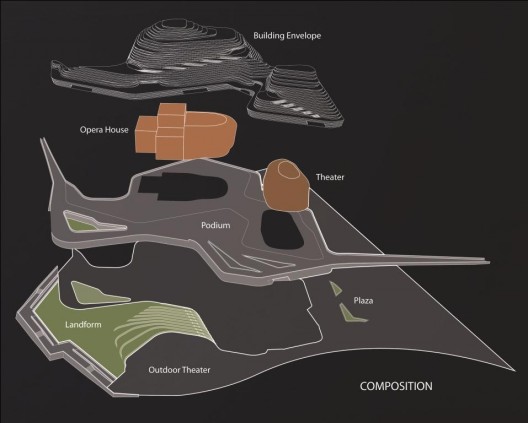 The landform is a successive step in a route alternative to the lobby that connects the Marine Culture Plaza to the podium along a path located along the edge of the site. Visitors can gather here for public performances in the outdoor theater, take leisurely strolls directly on the waterfront, and invigorate their spirits in the green space by the sea.

Dramatic views from the site extend into the city from one side and beyond the port into the sea from the other side of the island. To further accentuate the experience for views, special areas offering visitors views from elevated positions have been strategically placed using terrace platforms along the edge of the building envelope.

The long tradition of opera and theater as a dramatic form of art continues on stage, escalating the emotions of those who come to see performances. This tradition calls for an architecture that not only accentuates the emotions opera draws from the audience but also brings forth emotions in a similar dramatic effect. The spirit of stage and theater resounds throughout Busan Opera House celebrating its status as a new cultural icon of the city.