Historically, rivers have served as the ecological and commercial backbones of the communities that boarder them. With the deindustrialization of American cities, these lifelines have been unclaimed for civic use. They lay cluttered; remnants of their past serve as barriers to their potential re-use. This proposal by StossLU seeks to claim the Mississippi River and envision its transformation into park space as a spectacle in its own right within the city of Minneapolis. 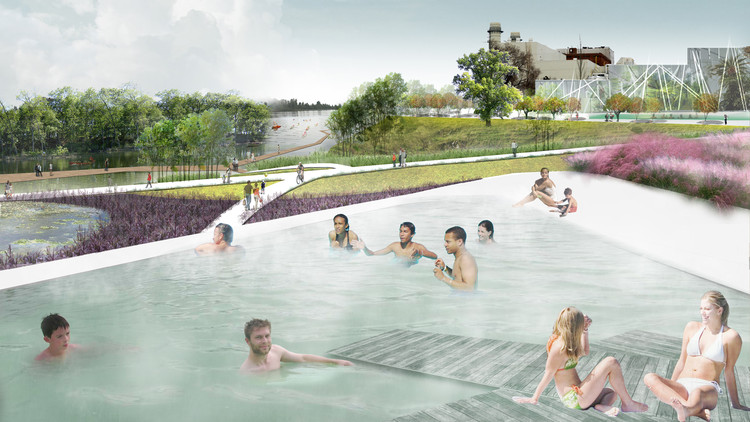 This project is about injecting people to the riverfront area in direct contact with the river and its ecologies. The proposal is comprised of several pedestrian bridges and paths that connect existing public parks to the site where river islands are transformed into ecological sanctuaries accessible throughout the year. Other strands of infrastructure, landscape, and program are positioned within the project to promote access, ecological growth, and pedestrian density in a way that is constant and unfettered in ambition.

In activating the areas alongside and within the river, neighborhoods of Minneapolis to the North and Northeast, long separated by an industrial barrier would now be able to perceive and experience their physical closeness. The multi-layered ambition of this project to first fill the vacancy alongside the river and then make connections to existing park and urban infrastructure promotes growth both from the river outward and from the residential neighborhoods in.

Floating barges transformed into amphitheaters, bandshells, and swimming pools would further populate the water bringing life to the area.  Luminescent “light-boats” would travel the river, a visible marker of renewed movement along the river at night.

Additional elements that filter stormwater, deal with waste heat, and create renewable energy are integrated into an overall site strategy that holistically applies sustainable practices to the park. These notions are integral to creating such a diverse field of program and use while still maintaining a positive environmental impact on the region.

The overall composition can be seen as a way of re-grounding the city in its historical roots as explained in the project statement. “A river, a park, & a city, inextricably intertwined: environmental dynamics, hearty work, and rich social lives together weaving multiple threads for a new generation, just as the Mississippi has woven for centuries.”