Solo House Casa Pezo is part of the Solo Houses concept, series of eight to ten vacation homes designed by some of the talented young international designers. Pezo Von Ellrichshausen Architects, Mos Office, Didier Faustino and his studio Mésarchitectures, Sou Fujimoto, Studio Mumbai, and TNA – Takei-Nabeshima-Architects are among the architects designing the 200 sqm size homes, with the first collection to be set in the countryside of Matarraña.

Solo Houses is a similar concept to Living Architecture. Set up as a new social enterprise to revolutionise both architecture and UK holiday rentals, Living Architecture commissioned Peter Zumthor, Michael & Patty Hopkins, NORD, Jarmund/Vigsnæs Architects & MVRDV to each design homes. Many of these have been featured on ArchDaily including MVRDV’s unforgettable Balancing Barn. 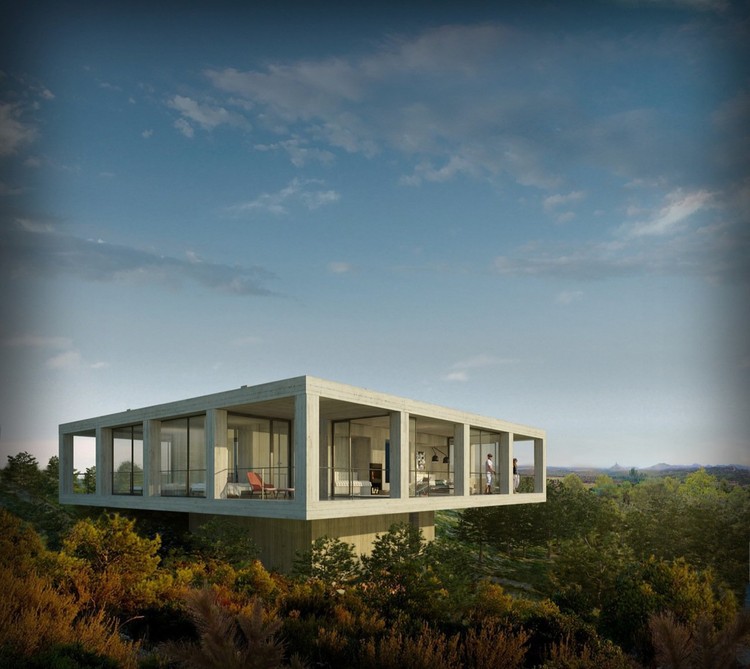 This is a singular piece that occupies a dominant position in the landscape. It is a horizontal figure separated from the ground. A sculptural structure, unitary and monolithic, that is supported by a blind podium. An elevated condition visible from a distance and another that disappears under the foliage. The platform’s aerial world establishes its own cardinal directions. A perimeter ring, a panoramic rotunda measured by sixteen columns at regular distances, is occupied by a sequence of rooms with informally defined functions. Transparent and symmetrical rooms articulated by open corners.

A portico too narrow as to hold a static room and too deep as to hold a vigilance balcony. On the platform’s aerial world there is a single interior room. This room has no roof. It is barely perforated in all four directions of the landscape and its base is occupied by water, a volume of water as profound as the high that separates the house from the natural ground. This contained water, the softest patio known, always finds the way to move the sky to the bottom of the earth.